The MVA government could last its full term if the chief minister continues to show his political acumen. 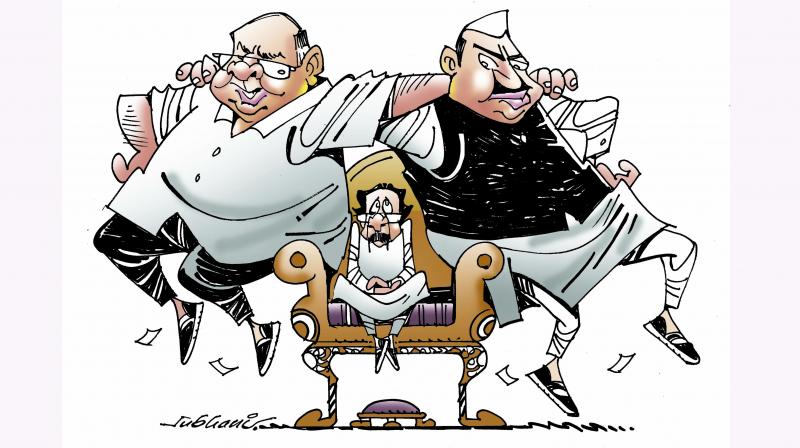 Uddhav faces a test in running the ‘Great Maharashtra Political Circus’. There have already been murmurs of discontent over the Cabinet formation among his allies.

You may shrug off this statement by senior Sena leader Sanjay Raut as bravado, but the fact just cannot be denied that his party pulled off one of the biggest miracles in Indian politics by snubbing the Bharatiya Janata Party (BJP) and joining hands with Congress to form the Maha Vikas Aghadi (MVA) government with the Nationalist Congress Party (NCP) as the third partner.

That the Sena could come forward and reach out to the Congress for support was considered a highly unthinkable proposition a couple of months back. The two parties, which are poles apart in their ideologies, have viciously taken each other on for the last three decades. The fights were at times bitter, with Sena always being the dominant partner in its alliance with the BJP and striving to snatch power at the expense of the Congress.

But as they say, politics can make for strange bedfellows. Shiv Sena and Congress have proved just that. Connected by certain compulsions, but extremely different in overall characteristics, opinions, ideologies and behaviours. One is a hardcore Hindutva party, while the other’s very existence is based on its secular principles. But are they destined to fall divided?

Within a fortnight of Uddhav Thackeray taking over as the chief minister of the MVA government, sparks have already started flying between the Sena and Congress. As soon as Rahul Gandhi made his controversial statement “I am not Rahul Savarkar”, while refusing to apologise for his “Rape in India” comments, Sena made no bones about its displeasure, saying that the Hindutva icon must be respected. “Just as we revere Pandit Nehru and Mahatma Gandhi, you should not insult Veer Savarkar. There is no need to speak more to wise people on this,” Mr Raut warned menacingly.

Another flashpoint occurred in the form of the Citizenship Amendment Act (CAA), where Sena first voted in favour of the bill in the Lok Sabha. After Congress openly expressed its annoyance, it then did a spectacular U-turn and staged a walkout from the Rajya Sabha. The move clearly showed that the Sena was still not comfortable with Congress’ decision to oppose the bill. It did not even participate in the delegation of Opposition parties, which met President Ram Nath Kovind seeking recall of the bill.

“The accumulation of such contradictory issues might lead to the collapse of the MVA government in future,” said Surendra Jondhale, political analyst and professor of political science at Mumbai University.

“The Savarkar issue was the first flash point. Shiv Sena’s summersault on the CAA has again exposed its ideological differences with the Congress. If such issues keep cropping up and both parties continue to take diverse stands, it will lead to accumulation of differences between them. If both parties fail to show restraint, then I see no bright future for the government. It will collapse due to its own contradictions,” he added.

Mr Jondhale feels the onus lies with the CM on how to balance these ambiguities to run his government. “Uddhav knows it very well that the political arithmetic in the state now doesn’t allow him to go back to the BJP. It will be politically suicidal for the Sena. So he will have to do a tightrope walk to ensure that contradictory decisions are not taken to upset his new friends.”

What will give Uddhav comfort is that relations between the Shiv Sena and the Congress have not always been frosty in the past. In fact, there have been instances of the two parties hobnobbing with each other. The Sena had supported the Congress on several occasions including the presidential elections of Pratibha Patil and Pranab Mukherjee. Party founder Bal Thackeray had supported the Emergency imposed by then Prime Minister Indira Gandhi in 1975. In the 1977 general elections, too, the Sena had decided to support the Congress.

Political expert Nilu Damle pointed out that the Shiv Sena has a history of changing its stands. “The party which was formed to protect the rights of the Marathi-speaking people then vented its ire against the communists and socialists. It even had supported the Con-gress once and then suddenly they switched to Hindutva. However, the feature of Balas-aheb Thackeray’s leadership was that he convinced his followers to adapt to these changes. Uddhav has also succeeded in persuading the Sena cadres on his decision to snap ties with the BJP and join hands with the Congress and the NCP.”

“In recent days, Uddhav has shown he has been acquiring the intelligence required for political flexibility. The MVA government could last a full term if he continues to show his political acumen,” he added.

According to him, in politics, there is no particular issue on which political parties have a definite opinion. So they refrain from taking an extreme stand that can result in the fall of a government. “All three parties know very well that the very reason of their coming together will be defeated if the BJP comes back to power again. So they will keep aside their differences, howsoever strong they may be, to sustain their alliance,” Mr Damle said.

Despite this, Uddhav faces a stern test in running the ‘Great Maharashtra Political Circus’. There have already been murmurs of discontent over the Cabinet formation among the NCP and Congress. Due to this, the MVA government is yet to form a full-fledged Cabinet. Even the allocation of portfolios has been done on an ad-hoc basis. It is said that the distribution of ministries has been delayed due to possibility of a rebellion as several top leaders in all three parties are eyeing plum portfolios.

However, accommodating all seniors and pampering them with creamy posts will be a difficult task as young leaders are insisting on their share of pie. Apart from balancing the caste equations, all parties will also have to give representation to new faces, women and minorities. So there are bound to be disgruntled elements in the government. Given all these intricacies, the fate of the MVA government hangs in the balance even before it has started working properly.

If the MVA experiment proves successful, it is sure to bring a tectonic shift in national politics. It has the power to provide a belief to the anti-BJP parties that they can keep the saffron party out of the power if they set aside their differences. In states like Jharkhand and West Bengal, where the BJP juggernaut is rolling on, such experiments might be possible. And they might even be implemented at the national level too.