Being a wannabe, being a writer, being a bit or a lot of both

Namita Gokhale writes this novel with a gaze that is remarkably dispassionate, throwing open a literary cocoon to artful scrutiny 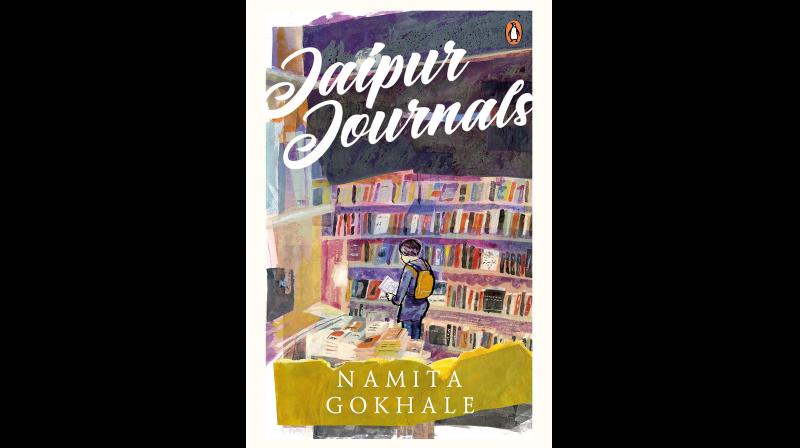 In the thick of the lit-fest season, when literary folk enjoy a spot in the sun, Namita Gokhale’s metafictional novel examining the thorny writing life comes as a marvellously timely read. Jaipur Journals is set in the annual Jaipur Literature Festival, in and around the venue The Diggi Palace, offering both a delicious ring-side view and behind-the-scenes glimpses of “the greatest literary show on earth”. It works because it taps, ever so gently, into the messy lives of the lonely and somewhat mysterious tribe of writers, with delightful insights and enough drama to make it worthy of a cinematic dramedy. Perhaps some day?

In Jaipur Journals, multiple stories and perspectives are linked into a single narrative, with a quirky set of characters colliding, as it were, at the literature festival. As co-founder of the Jaipur Literature Festival, Gokhale has obviously seen it all up close: the authors and their devoted audience, the literary squabbles and the schmoozing, the panels and the parties, the hyperbole and the hypocrisy, the sparks on stage and drama off stage. To her credit, Gokhale writes this novel with a gaze that is remarkably dispassionate, throwing open a literary cocoon to artful scrutiny, revealing, layer by layer, the many insecurities and vulnerabilities of the people that populate it.

At the centre of the book is the 70-something “failed novelist” Rudrani Rana, who carries around with her her life’s most precious creation: the manuscript of her “private masterpiece” titled UNSUBMITTED. Haunted by her past and painfully guarded about her future, Rana is fearful of sending out into the world the very book she has devoted herself to. On the train to Jaipur, she meets a writer as young as she is old: 12-year-old Anura, who’s attending the festival for a Young Adult session, invited to read from her self-published book of dystopian fiction. Rana, meanwhile, is a festival regular and something of a truth teller. “This was her third year now, and she knew her way around the crowds, she knew how to tell the speakers what she thought of them, how to debunk their hubris, bring them back down to earth.” And just like that, both writers, one weary and wise, the other curious and hopeful, are linked instantly in ways more than they will ever know.

Through the lens of the popular literature festival, Gokhale pries open the politics of the literary world to look at not just the writing life, but our collective contemporary concerns - rising hatred, jarring jingoism, widening polarities, blurring boundaries– and how we engage with them in literature and in life. How do we make sense of it all, within and outside of the writing community?

Largely unfolding over five days of the festival, the narrative moves between private and public spaces where the carefully arranged masks come off briefly: the colourful tents that host the panel discussions, the author’s lounge and the press terrace, the posh hotel rooms occupied by the speakers and the humbler guesthouses by the attendees, the saucy parties and the pink city’s tourist hubs.

The charming and familiar setting helps build the novel into a piece of well-observed of-and-for-the-moment social commentary, as a string of incidents set off in motion certain life changing events. We meet the mysterious Betaab, a poet and thief who has a moment on the dance floor where he steals the evening singing Faiz Ahmad Faiz’s Bol ki lab azad hain tere to thunderous applause. We run into the fiery feminist icon, the gender fluid writer Zoya Mankotia who begins to question what she stands for after she receives an anonymous letter accusing her of “intellectual pretenshuns”. We follow academic and aspiring novelist Gayatri Smyth Gandhi’s messy romantic and professional pursuits at the festival. And we fall for the kind and passionate Anirban M, a graphic crossover artist who befriends Rudrani Rana, she who seems like the odd one out, worthy of the centerstage but hovering on the margins. These are characters feel lived in with solid backstories, although some of the other quieter characters and their subplots feel a bit underdeveloped. Even so, in the middle of a month that carries with it a heaviness that is all too pervasive, I was grateful for Jaipur Journals — to dip into it felt reassuring, its world familiar yet with depths untold, as it reminded me that the writerly life, though lonely, holds so much life, even in death.