A wolf in sheep’s clothing

The Multistrada may not be a sports bike, but you sure can ride it like one. 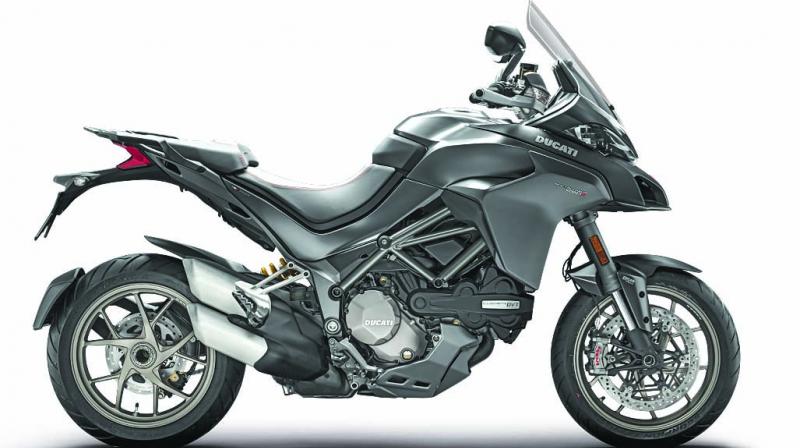 With Multistrada 1260 S, the Ducati has introduced the third generation of its popular Multistrada portfolio, and at first glance, not much has changed.

Since its debut in 2010, Ducati’s Multistrada line-up has been famously known as the wolf in sheep’s clothing, which means that even though it wears the comfortable attire of a tourer, it is packed with the performance of a sports bike. With Multistrada 1260 S, the Ducati has introduced the third generation of its popular Multistrada portfolio, and at first glance, not much has changed. But in this case, looks are very much deceiving, and Ducati has in fact packed a fair amount of changes into the new variant, starting with the X-Diavel’s 1,262cc Testastretta DVT powertrain. That means that its upgraded engine comes with a new degree of rideability.

At first glance, it is love at first sight. The hawkish facial features, large bright eyes, dark skin, and smooth flowing body-lines, will sweep you off your feet. The 1260 S is not very different from its 1,200cc counterpart. It has the typical ADV-like beak and the headlights look near identical, and you have to take a closer looks to notice that the side panels of the fairing are not exactly the same. The TFT display is even crisper looking, as it provides you with all vital information like tank range, average speed, fuel efficiency, and many more.

It received a bigger, 1,260cc L-twin, engine borrowed from the XDiavel and offers 158 hp of power along with 129 Nm of torque. This increment over “1200” might sound modest, but the magic is in the improved power delivery at low to mid revs. The 1260 S also gets a bi-directional quick-shifter. Known for its rideability, it provides linear power from around 2,000 revs and plentiful torque, which is also available much lower down the revs than the previous unit — a claimed 85 per cent is available from 3,500 rpm, and it’s certainly noticeable.

Ducati claims to have improved this high-speed stability, thanks to a 48mm longer swingarm, 5mm longer trail, and 1 degree increased rake, which in total makes for a 1,585mm chassis — that’s 56mm longer than the outgoing model. Our test route (highway and city) gave us a good opportunity to put this to the trial. The 1260 S was steady and balanced even in triple-digit figures. The next thing about the motorcycle that will put a smile inside that helmet is its agility and its capability to manoeuvre, both at speed and a standstill. At its standard 845mm seat height, this certainly is not a motorcycle for the short rider. With wide bars and an upright riding position, the Multistrada is comfortable.

In bends, you will find yourself leaning forward into the wide bars. The Multistrada may not be a sports bike, but you sure can ride it like one.

Riding this bike reminds us of what made us like motorcycles in the first place. The combination of all-day comfort, true sportbike performance, ability to explore in the dirt, and little touches of Italian style make the Ducati Multistrada 1260 S a machine worthy of any adventure tourer’s consideration. At `18.16 lakh (ex-showroom, Delhi), The Multistrada 1260 S is sure a little expensive ADV when you compare it to its competitions. Ducati also offers the lower-spec Multistrada 1260, which is priced at `17.80 lakh (ex-showroom), if it is a bit too expensive for your liking. Overall, the motorcycle looks stylish, is very powerful, brilliant handling on the tarmac and could go places where most motorcycles won't dare to.