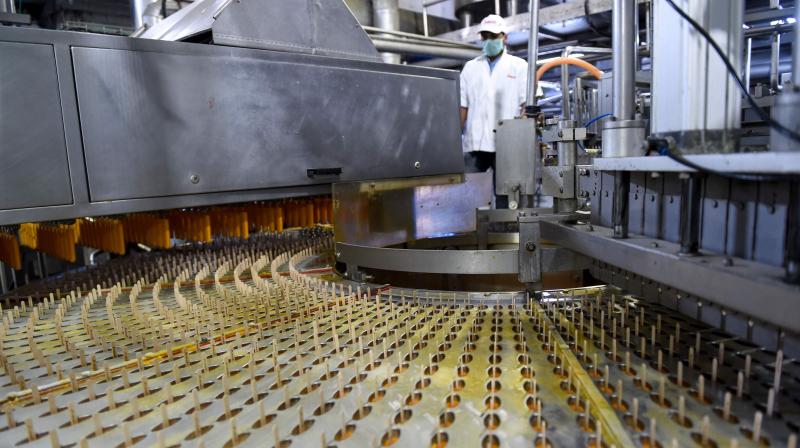 The headline seasonally adjusted IHS Markit India Manufacturing Purchasing Managers' Index (PMI) fell to 27.4 in April, from 51.8 in March, reflecting the sharpest deterioration in business conditions across the sector since data collection began over 15 years ago.

The index slipped into contraction mode, after remaining in the growth territory for 32 consecutive months.

In PMI parlance, a print above 50 means expansion, while a score below that denotes contraction.

Amid widespread business closures, demand conditions were severely hampered in April. New orders fell for the first time in two-and-a-half years and at the sharpest rate in the survey's history, far outpacing that seen during the global financial crisis, the survey said.

"After making it through March relatively unscathed, the Indian manufacturing sector felt the full force of the coronavirus pandemic in April," said Eliot Kerr, Economist at IHS Markit.

Panellists attributed lower production to temporary factory closures that were triggered by restrictive measures to limit the spread of COVID-19.

Export orders also witnessed a sharp decline. Following the first reduction since October 2017 during March, foreign sales fell at a quicker rate in April. "In fact, the rate of decline accelerated to the fastest since the series began over 15 years ago," the survey said.

On the employment front, deteriorating demand conditions saw manufacturers drastically cut back staff numbers in April. The reduction in employment was the quickest in the survey's history.

"In the latest survey period, record contractions in output, new orders and employment pointed to a severe deterioration in demand conditions.

Meanwhile, there was evidence of unprecedented supply-side disruption, with input delivery times lengthening to the greatest extent since data collection began in March 2005," Kerr said.

On the prices front, both input costs and output prices were lowered markedly as suppliers and manufacturers themselves offered discounts in an attempt to secure orders.

Going ahead, sentiment regarding the 12-month outlook for production ticked up from March's recent low on hopes that demand will rebound once the COVID-19 threat has diminished and lockdown restrictions eased.

"There was a hint of positivity when looking at firms' 12-month outlooks, with sentiment towards future activity rebounding from March's record low. That said, the degree of optimism remained well below the historical average," Kerr said.

In India, the death toll due to COVID-19 rose to 1,373 and the number of cases climbed to 42,533 as on Monday, according to the health ministry.

Meanwhile, the coronavirus-induced lockdown has been extended beyond May 4, for another two weeks in the country.