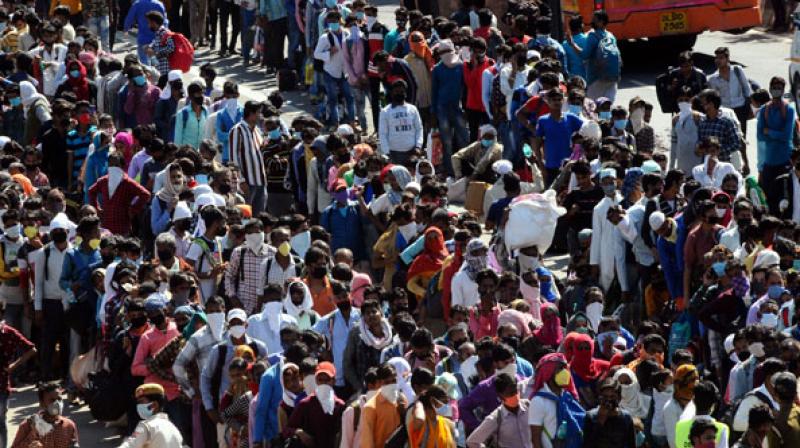 New Delhi: The Confederation of Indian Industry (CII) has called for an immediate economic stimulus package of Rs 15 lakh crore or 7.5 per cent of the GDP to tide over the impact of Covid-19 led countrywide lockdown.

The lead industry body said the pandemic has severely crippled the national economy. The lockdown which was necessitated to arrest the spread of contagion has come at a huge economic cost.

By the time third phase of lockdown ends, the industry would have lost almost two months of output, said CII.

With economic activities being restricted for over 50 days now, the negative impact on economy is expected to be even more significant than what was anticipated earlier. This needs to be offset by a large fiscal stimulus so that jobs and livelihoods are protected.

"CII recommends the government to announce an immediate stimulus package of at least Rs 15 lakh crore, which translates into 7.5 per cent of GDP," said President Vikram Kirloskar.

The broad elements of the stimulus include cash transfers of Rs 2 lakh crore to JAM account holders in addition to the Rs 1.7 lakh stimulus already announced.

A key fallout of this economic slowdown will be the human cost in terms of loss of jobs and livelihoods, which need urgent government intervention, said Director General Chandrajit Banerjee. "It should be ensured that migrant labourers are kept within the purview of proposed cash transfers."

CII also called for providing enterprises an immediate support to pay salaries to its workers and avoid any job losses.

It suggested a provision of Rs 2 lakh crore for additional working capital limits to be provided by banks, equivalent to April to June wage bill of the borrowers, backed by a government guarantee at 4 to 5 per cent interest.

To support the estimated 6.3 crore micro, small and medium enterprises (MSMEs) battered by the pandemic, CII suggested a credit protection scheme under which 60 to 70 per cent of the loan should be guaranteed by the government.

That means if a borrower defaults, the government should repay the bank up to the amount it has guaranteed so the risk to lender is limited.

In addition, CII suggested creation of a fund or special purpose vehicle with a corpus of Rs 1.4 crore to 1.6 lakh crore which will subscribe to non-convertible debentures or bonds of corporates rated A and above.

The fund can be seeded by the government contributing a corpus of Rs 10,000 crore to 20,000 crore with further investments from banks and financial institutions. This will provide adequate liquidity to industry, particularly the stressed sectors like aviation, tourism and hospitality.

In order to create a significant multiplier impact on boosting demand in rest of the sectors and enhancing long-term productivity, funding public infrastructure has been found to be a potent option.

CII suggested an allocation of Rs 4 lakh crore be made on a public works programme that will create job opportunities. The work should be initiated with the involvement of state governments so that implementation bottlenecks can be overcome.

Specifically, the spending can begin with the completion of projects that have already begun, such as roads which are stalled after 80 per cent of the job is complete.

CII has also suggested an allocation of Rs 2 lakh crore to be earmarked for bailing out state-run electricity distribution companies that have been accumulating losses and burdening the state exchequer.

To protect the financial sector for meeting credit needs of real estate sector as well as absorb some shocks from potential insolvencies, an allocation of Rs 2 lakh crore for bank recapitalisation is required. This will help public sector banks manage any surge in their non-performing assets.