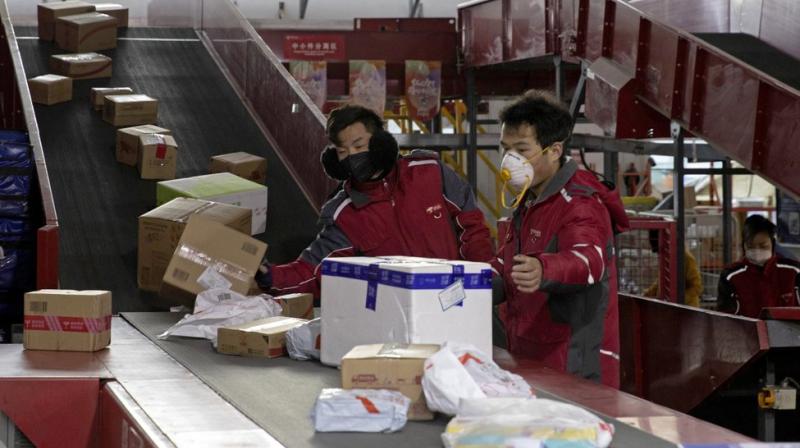 Demand for online food vendors has surged since China’s government told the public to stay home as part of the most sweeping anti-disease controls ever imposed.

On Tuesday, Wang’s phone buzzed with a text message that a delivery had arrived. The retiree bundled up against the winter cold, put on a face mask and emerged from her apartment complex to collect walnut milk and other goods from shelves on the sidewalk — an anti-virus measure to limit contact with drivers who normally go door to door.

“They work really hard, and it’s dangerous,” said Wang. “Without their services, we would not be able to survive at all.”

JD.com Inc. and rivals including Pinduoduo, Missfresh Inc. and Alibaba Group’s Hema are scrambling to fill a boom in orders while trying to protect their employees.

E-commerce is one of the few industries to thrive after anti-virus controls starting in late January closed factories, restaurants, cinemas, offices and shops nationwide and extinguished auto and real estate sales.

The government is trying to revive economic activity but has told anyone who can work from home to stay there. Some cities have imposed controls that allow only one member of a family out each day. That creates a ready market for online entertainment and shopping.

“I can’t go out and can’t go to work,” said one of Wang’s neighbors, Chen Guang, who was picking up a box of vegetables from the sidewalk shelves under a sign that said, “Contactless Distribution Point.”

Chen, who wore an entry pass for his apartment complex around his neck, said he shops online two to three times a week to replenish kitchen supplies.

JD says over the past month, its drivers delivered 71,500 tons of rice, flour and other grains — 20 times more than the same period last year, — 27 million liters of cooking oil and 50,000 tons of meat, eggs, vegetables and other fresh products.

Pinduoduo said orders for apples, strawberries and other fresh fruit from its 586,000 sellers of agricultural products were up 120% in January.

Chinese e-commerce companies emerged in a market that lacked credit cards, reliable delivery and other features their counterparts in the United States and Europe take for granted. That required JD, Alibaba and some other competitors to create their own online payments systems or networks of warehouses and delivery drivers.

JD has a 180,000-strong workforce of drivers and warehouse workers and says it is hiring 20,000 more to meet demand. The company said Dada Group, a delivery service in which JD is an investor, is adding 15,000 to its workforce.

At a JD distribution center on Beijing’s southeast side, employees in red parkas, masks and gloves sorted packages and sprayed them with disinfectant.

Goods from oranges and toilet paper to 32-packs of beer and cat litter came off trucks on one side of the building and passed down a conveyor belt to be sorted for individual drivers. Padded blue boxes held fresh fruit and vegetables.

On the other side of the building, drivers loaded battery-powered three-wheeled delivery vans emblazoned with JD’s logo, a cartoon dog called Joy.

The average driver delivers 150 to 190 packages a day, according to Sun Lansong, the facility’s manager.

“Customers used to buy a lot of electronics,” Sun said. “Now they are buying rice, noodles, grain, oil, disinfectant, masks and so on.”

Sun said distribution center employees and drivers spray packages, vehicles and their work stations with disinfectant and wash their hands repeatedly during the day. All are issued masks and gloves.

“Before, it might have been rude to talk to people while wearing a mask. But now it feels much better,” said Sun.

Yanxuan, an online consumer products vendor owned by NetEase Inc., said it is giving away masks, hand sanitizer and other anti-disease products in Hubei, the province at the center of the outbreak.

Pinduoduo Inc. announced the launch of a “Help the Farmers” channel this week to allow customers to buy directly from producers in poor areas.

It said that was intended to support suppliers that are having trouble getting shipments to traditional markets due to anti-virus measures. The company promised 500 million yuan ($70 million) to subsidize purchases.

Traditional grocery stores are open and heavily stocked as the government tries to reassure the public that food supplies are ample following a bout of panic buying after most access to the central city of Wuhan was suspended on Jan. 23. But many households are avoiding going out at all.

“Now everyone pays more attention to it, for their own and everyone’s safety, to try to go out as little as possible, responding to the nation’s call,” Wang said.

E-commerce companies also have been squeezed by the anti-disease controls. Employees were stranded in their hometowns following the Lunar New Year holiday after bus and train services in some areas were suspended to contain the outbreak.

Sun said one of his facility’s employees from Hubei, the province at the center of the outbreak, and two from neighboring Henan province had yet to return.

“I’m not afraid. Still the same. It feels like coming to work is making a contribution to society,” said Sun. “It sounds like this virus is terrible. In fact, the virus can be prevented.”

The volume of goods being delivered has risen 30% since the outbreak, said a JD driver, Li Hu. He said the effort required is partly offset by only being allowed to take packages to a sidewalk collection point.

“Customers are very supportive,” Li said. “They all understand the volume is bigger. They are short of daily necessities,” he said. “As soon as we arrive and call, customers come down immediately.”