Dramatic life: All the world is their stage

Nireeksha Women’s Theatre was born out of the observation that women in Kerala did not dance or sing as visibly as women in other states. 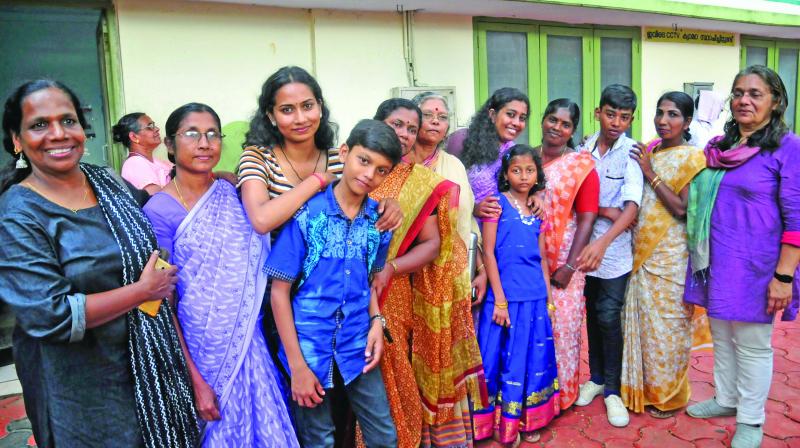 Artistes of Sayanthanam — a drama played on the occasion of Vayojana Varaghosham in Trivandrum — pose at the beginning of the programme. (Photo: A.V. Muzafar)

It’s raining at 4 pm. The chairs in front of the Bapuji Grandhashala are emptying after a few speeches. They are celebrating Vayojana Varakhosham — Elderly People Week — in Thiruvananthapuram. The rain gets stronger but a woman puts a shawl over her head and goes and stands in front of the stage. As she does this, other women climb onto the stage to perform a play which someone announces is Sayanthanam by Nireeksha Women’s Theatre.

The woman in front — Rajarajeshwari — keeps standing, ignoring her bad leg, video-recording the entire play. She’s written it and her mate Sudhi Devayani, standing somewhere at the side, has directed it. Like all their plays made in the past 18 years.

It began in 1999 as a one-of-its-kind theatre group for women, in a shed in Karamana. Rajarajeshwari was a Mathematics lecturer with a secret taste for writing that Sudhi, a theatre artiste, discovered. The idea to start a women’s theatre group, says Raji (short for Rajarajeshwari) was born out of their observation “that there was little space for women in theatre, that it’s all conventional and stereotyped characters, that there are body constraints and that women were not taking the narrative forward. The thought that women in Kerala did not dance or sing as visibly as women in other states did, the thought to bring them out of their inhibitions and give a different kind of freedom”.

At first they held workshops concentrating on children, then women, and then street plays. The first major play happened in 2005 — Kudiyozhikkal, an adaptation of Vyloppilly Sreedhara Menon’s poem. It was about a feudal lord’s confusions, but they gave a woman’s perspective to it.

The first full length script from Raji, Pravachaka, reached the final round of competition at the Kerala Sangeetha Nataka Akademi. It got selected for the Bharat Rang Mahotsav, their first fest outside Kerala.

The next play, Anungal Illatha Pennungal or Men Without Women, based on an Iranian novel by Shahrnush Parsipur, won Sudhi the best director award from the Akademi. “She was the first, and to date, the only woman playwright to win that award for amateur drama competition,” says the proud friend. Their recent major play Punarjani was the only one from Kerala to be selected for the Delhi National Theatre festival in 2014.

Nireeksha grew through the years. Raji and Sudhi bought 10 cents of a land in Pamancode and put up a training centre there. They also made a home there. Now, there is full-fledged theatre work available and the area has developed. Women from all walks of life began joining Nireeksha to train in acting, scriptwriting, direction and costumes. Children too. “In rural places, there are suicides happening, there is a drinking problem, and there are many broken families. We decided to concentrate on the children from these families, who could be prone to addiction or suicide. That’s how we began Anubhava children’s theatre. The idea is not to find talented children, but find out such unfortunate kids and expose them to art forms, make them socially aware.”

Sayanthanam, for instance, is about old age problems, but presented in a humorous way. But it will make the children, who are part of the play, think. They also began Bhava, a programme for girls from the Nirbhaya home. Perhaps one of their biggest achievements is the five women-only theatre groups that they helped create with Kudumbashree women (Kudumbashree is the women-oriented community based poverty reduction programme of the Kerala government). “The idea started from Oorjashree, a project for energy conservation. We had Kudumbashree workers do awareness plays in 14 districts, with 14 different teams. It is from there that the idea of community theatre developed. We trained 36 women who then formed five women-only theatre groups, under the name Rangashree. These women are now masters, teaching theatre to other women. It’s become a source of income,” Raji says.

Their next plan is to work on the concept of rural women’s theatre. “It is not about big plays,” says Raji. “It is about reaching out to as many women, giving another kind of energy. They enjoy doing this, even with the many problems in their lives. The women you saw today at the Bapuji Grandhashala — after the play, they are all going back to their problems. But they are happy when they are on stage.”