From plastic to fuel

Some of the fuel generated with their experiment has been sold to villages around Pune for Rs 35-Rs 37 a litre. 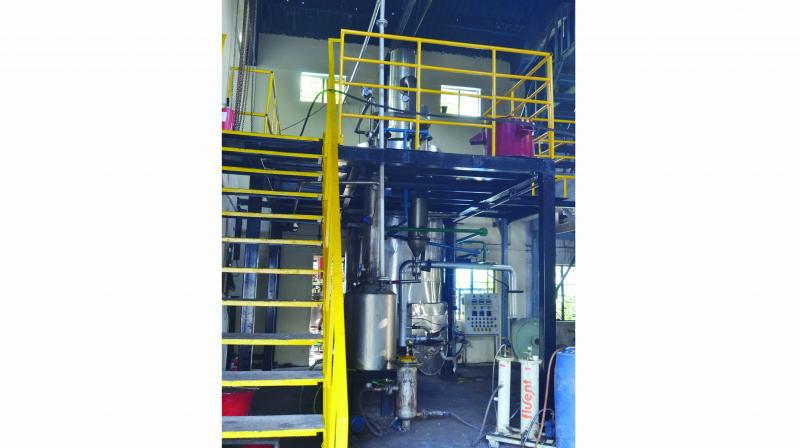 Rudra Environmental Solutions are all set to make good use of the eight billion tonnes of plastic waste the world dumped in landfills and oceans to generate
polyfuel. Some of the fuel generated with their experiment has been sold to villages around Pune for Rs 35-Rs 37 a litre.

Plastic is the bane of our modernised world. It takes hundreds of years to decompose and yet it is difficult to imagine life without it. Rudra Environmental Solutions, a young company based out of Pune, had the audacity to think of converting this non-degradable material into fuel. Dr Medha Tadpatrikar, partner, Rudra, tells us how they create fuel from waste plastic.

It all started with a cube of melting ice. “My dad takes exactly three cubes of ice in his drink and the host had put four. So he took out one cube and placed it on a plate. Shirish, my partner, and I were at that party and we thought that if water can freeze and turn to ice and then ice can turn to water, then why not plastic?” says Medha Tadpatrikar.

A month before that, the two friends were on a wildlife tour and could not take pictures because some deer at the sanctuary had died and the cause of death was plastic in their tummies. This had a profound effect on Shirish, a Chartered Accountant, and Medha, who has a PhD in Management Science.

“It was anyway on our minds to do something about plastic though we didn’t know what,” says Medha. And then the ice cube incident happened and pushed the two of them into the kitchen to experiment.

They collected plastic bags and heated them in a pan. Nothing happened. Then they tried with a pressure cooker. All that was left was a residue.

They met several petrochemical engineers to learn what plastic was and how it was derived. Through several trials and errors the duo thought of attaching a pipe instead of putting a whistle on the cooker. “We found that the pipe immersed in a glass of water had some black floating pieces upon heating the plastic. When we lit this it burned.”

A friend who was invited to this experiment told them that the smell emanating from the cooker was that of methane. Two years and several experiments later, Medha and Shirish hit the jackpot.

“We realised that if we reversed the plastic making process, we got two materials. One was this polyfuel that can be used for ignition and burning, while the black powder that came out of it was carbon black.” 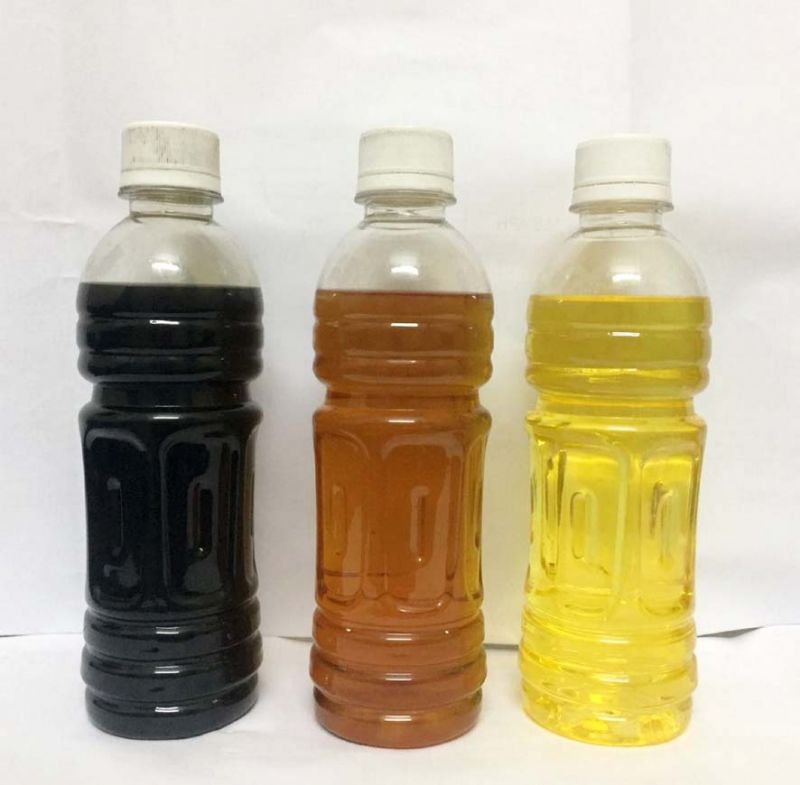 The fuel that was manufactured with used plastic.

But what about polluting the environment by burning plastic? Says Medha, “Well, yes, there is some amount of gas generated in the process, which is methane. This we reuse to fire our equipment. There is also some sulphur oxide (SOX) and nitrogen oxide (NOX) but these are in extremely small quantities compared to traditional fuel burning methods. The SOX generated is 0.017 ppm, while normally it is 0.8 ppm. So it is really quite miniscule. The carbon black is passed on to the municipal corporation to add to bitumen roads.”

Rudra started operations four years ago and today has recycled 22 tonnes of plastic from 15,000 households in Pune. In a little over a year, four tonnes of plastic was collected from Thane and Dombivli near Mumbai, and 3.4 tonnes from Baramati. Plans are afoot to move to all the metros.

“But we have realised that we cannot be everywhere. So we now sell our equipment, which is undergoing the patent process, to NGOs and some companies in Hyderabad, Gujarat, Ratnagiri and Mumbai.”

So far, Rudra has not generated any profit. “We are a social enterprise and I feel it is more important that we do good than that we make money. But, yes, to be sustainable we have to make money. Which we will, once we roll out our plan to reach  all the metros. We are getting calls from Delhi particularly, since air pollution there is terrible.”

Today the reach is commendable, but it started with Medha collecting waste plastic from a few friends who agreed to give it to her.

“My driver and I would drive down to collect plastic from six to eight homes. Then we set up an NGO, Keshav Sita Memorial Trust, that started educating societies about waste plastic and how it can be turned to fuel. This way we have grown to 15,000 homes in Pune,” Medha says.

Two vans collect plastic from housing societies every week. This is then put into a shredding machine and then onto the Thermo Catalytic Depolymerisor that converts it into polyfuel. In the last year 22,000 litres of polyfuel was generated. Some of this fuel is sold to villages around Pune. “Even though they have gas connections in villages, they still burn wood or plastic to heat water for bathing. We have educated them about this and sell it for Rs 35-Rs 37 a litre. We sell the remaining polyfuel to people who use generators and incinerators. Some of the societies that contribute their plastic find this a cheaper alternative than diesel to fire their generators.”

So, why hasn’t Rudra offered its services to the Pune Municipal Corporation that generates 1,600 tonnes of garbage daily, seven to eight per cent of that being plastic?

“Well, the PMC recycles about 60 per cent of the plastic and 40 per cent goes into landfills. We have offered our services but the space needs to be worked out,” Medha says.

The possibilities are huge, as Medha points out: “The world has about eight billion tonnes of plastic dumped in landfills or the ocean. Imagine the amount of polyfuel this can generate. Imagine how much savings a huge mall in India can make (which uses approximately 10,000 litres of diesel per annum) if they buy polyfuel at Rs 40 instead of diesel at Rs 65 for their gensets? And generate miniscule amounts of pollutants while doing so?”

Yes, the opportunities to change the way we use plastic are huge. But Rudra is in no hurry. "We freely sell our equipment even though the patent is pending. Some people have even copied us. But that makes me happy. Rudra cannot be everywhere, right? So let people take our design, let them reduce pollution and shrink the landfills. The more the merrier!” says the polyfuel entrepreneur.