The words we use, whether written or spoken, offer a peek into our personality, a fact that has been proved by research. 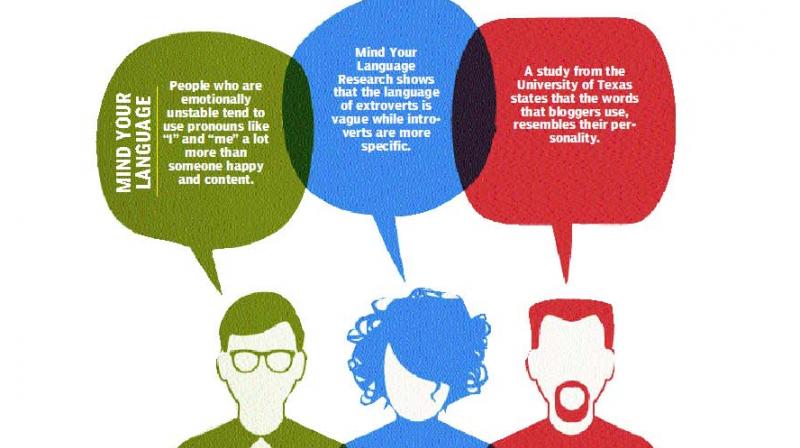 Communication has always played a major role in human existence. It’s literally the window to the human soul, unless of course, one is a sociopath or a psychopath, or both! However, it can be safely assumed that one’s personality might constantly shift from one spectrum to another — one might be super confident while talking to an interviewer but extremely nervous and tongue-tied on a promising first date.

The words that come out of our mouth offer a peek into our personality. In fact, there is staggering evidence to prove this. Camiel Beukeboom from VU University, Amsterdam, got 40 volunteers to examine photos of various social situations and give their own interpretations of it in front of everyone. Research showed that the language of the extroverts was vague while introverts were more specific. For example, an extrovert is likely to say: “This food is tasty." But an introvert will be more specific and say: “This food has all the spices that I like.”

Research also reveals that introverts have an affinity for articles like “the“ and “a”, and thus one shouldn’t be surprised to hear an extrovert say, “Let’s watch some movie.” An introvert would say, “Let’s watch a romantic comedy.”

Jordan Peterson from Toronto University established a connection between personality and the written word. He asked students to describe their former experiences and their aims for the future. It was revealed that students for whom extroversion was high, favoured words related to relationships. If you think about it, this makes perfect sense because extroverts thrive on being social.

Words give out other personality traits as well. Confidence, composure, nervousness, all of these can be perceived from the words coming out of you. Imagine, you are among the top three in a beauty pageant and have been asked a question about world politics, and you are absolutely clueless about this. If you stammer and stutter, it immediately gives away the fact that you are under-confident. On the other hand, if you appear confident and calm under pressure, it says that you embrace pressure pretty well.

Lara Dutta, former Miss India and Miss Universe is an example of this. According to Miss India trainer Sabira Merchant, Lara’s answers and speech were well formulated, which left a positive impression on the judges and one could easily tell that she is the type who can remain calm even under pressure.

Merchant says that the name of the game in beauty pageants is communication. She goes on to add that, “We are not just looking for a beautiful doll. An ideal beauty contestant must know what’s happening in countries like Japan, United States and Germany. In other words, we don’t want her to be a dumb blonde.”

Dr Ayesha Mehta of The Seventh Sense Movement and Language Centre talks about echolalia, the unsolicited repetition of words characteristic of autistic persons. She says, “Any particular phrase or word that their mind fixates on, they will keep repeating in an irrelevant situation. However, a person with mild autism can very well be articulate in their speech. Basically, it depends on the severity of the condition.”

In this day and age, when social media is an important part of a millennial’s life, it seems like we tend to give away our personality online too.

Researchers from the University of Texas dissected around 700 blogs and found that words that bloggers used resembled their personality. The tweets on Twitter have been under research as well, and it has been established that people who had a hard time being emotionally stable, tended to use pronouns like “I” and “me” a lot more than someone happy and content. Neurotic: “I like this view.” Extrovert: “We love this view!”

No wonder one is often told, “Choose your words carefully.” And now you know why — not just spoken but written as well!