Plagiarism: Nothing original about it

It is today impossible to get away with plagiarism in literature or journalism. 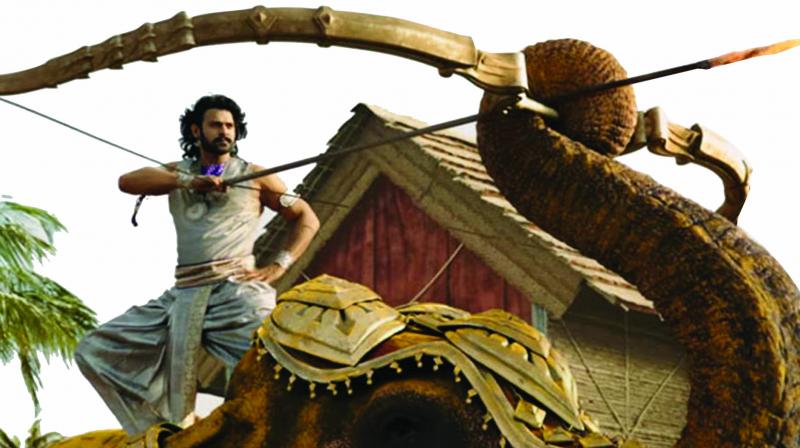 Men are capable of original thinking and such geniuses have made the lives of fellow humans better. It is the mediocre who cannot reconcile with it.

A friend of mine who works in Tollywood, and who after the success of Bahubali 2 has acquired quite a celeb-status across India, invited me for a coffee on one of the days he was taking a break from his work recently. Not one to let go of opportunities, immediately after congratulating him for his success, I shot my polemic dart: wasn’t Rajamouli a plagiarist who stole scene after scene for his financially successful opus?

“Why should I consider him an artist if he has no shred of originality,” I asked, enjoying my rant.

He responded emphatically. “Imagine the creative skills of a man who can bring up a  scene where a musth elephant settles down on seeing Lord Ganesha’s idol and as he pays his salutations, the hero pats it on trunk and gets seated on its top. Then, to complete a sacred ritual, the Queen throws up a lit spear, mounted on a mammoth bow,  to the hero which he bends with the tusker’s support to set the demon-king Ravana  afire”.

I referred to scenes that have been “replicated with the fidelity of a photocopy machine.” He hit back with a strong question: “Is there anything original in this world? Does not everything exist already? We just take from what is around and give it our own version.”

As a debate between a famous actor and an unknown stranger at a coffee shop, it was drawing lots of general attention, when he asked, “Did not even William Shakespeare take from Christopher Marlowe? Would you consider him a genius or not?”

A few weeks later, while still pondering the accusation against the Bard of Avon, I came across the news that maybe Shakespeare indeed plagiarised, as anti-cheating software had uncovered manuscripts from five centuries back that “bear shocking similarities to the Bard’s most iconic works”.

According to a report published by Charlotte Dean in the Mail Today and another by Alison Flood in The Guardian, Dennis McCarthy, a decoder, said, “There is no doubt that Shakespeare took inspiration from unpublished work by George North.” The “inspired” plays included King Lear, Macbeth, Richard III and Henry V.

The conclusion, if any, was that WCopyfind, a form of plagiarism detecting software that picks out common phrases, laid bare “striking similarities to themes and characters used” though “they are not suggesting he ever plagiarised North”. Shakespeare has previously been known to take inspiration from other sources.

From the world of literature and poetry, film scripts and screenplays, to painting and composing music, to more commercially applied arts, from copywriting and fashion design to architecture and photography, or even business models and technology innovations, how much of a new idea is yours, and how much did you draw from what previously existed? In literature, especially novels, and far less in short stories, the theme can be shared, and is often a reflection of shared aspirations and concerns of an age, its socio-economic conditions, or politics. It is sheer inspiration and this is where we see similarities between great authors and books. But the novel is the coming together of four major elements: theme, plot, characters and style – and charges of plagiarism, or serious “inspiration” happen when it goes beyond just one element. Imitation of style, for example, is often perceived as admiration, and the sowing of a seed of a school of art. But the rejection of originality as a possible virtue is to dismiss
the progress of mankind itself. Look at the political changes humankind has undergone, the new technologies, marvels of scientific discoveries, creation of newer means of art and music, invention of newer instruments to play music, printing, aeroplane, medicine, surgery, sky-scraper, telecommunications and the internet. Each has been the result of original thinking.

Men are capable of original thinking and such geniuses have made the lives of fellow humans better. It is the mediocre who cannot reconcile with it.

It is today impossible to get away with plagiarism in literature or journalism as the Kavya Vishwanath work, How Opal Mehta Got Kissed, Got Wild, and Got a Life, or the Fareed Zakaria episode have shown.

It is a little more complex in films or music, where copyright laws are stringent but the route to going to court and getting justice is complex. Routinely, script writers in India accuse producers and directors of stealing their ideas or scripts but little comes out of it.

Look at the launch of a new space shuttle. Or the iPhone in your hand. Think of a surgery in the heart of a foetus within the womb of a pregnant lady. It is proof that there are original writers and thinkers, businessmen and artists across the world. Would you want to meet them as peers, or sneak in with a stolen ID card to meet some vanity to pose as one is the answer each artist must give oneself

To quote the Bard from Sonnet 116, ‘Let me not to the marriage of true minds...’: If this be error and upon me proved, I never writ, nor no man ever loved. There is no art without originality, and if there is nothing significantly new, over everything that existed before you write your first word, or paint on a canvas with the first stroke of a brush, you are not an artist but a crook.

Sriram Karri, author of Autobiography of a Mad Nation, is a novelist and columnist.