The theory that diseases can be detected through the breath dates back to 2,400 years ago. 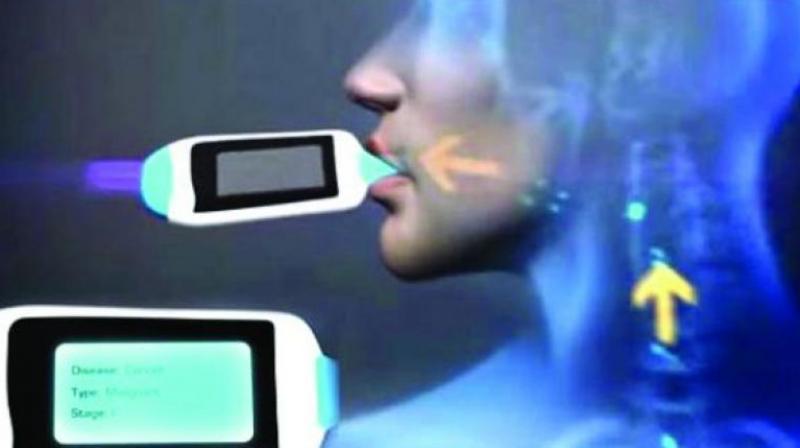 Scientists are working on an “electronic nose”, which can detect diseases early by analysing the smell of a patient’s breath.

Scientists are working on an “electronic nose”, which can detect diseases early by analysing the smell of a patient’s breath.

The ‘Nanose’ is a device which uses artificially intelligent nano arrays to “'smell” a person's breath and identify volatile organic compounds at molecular level.

Thirteen of these compounds in various amounts and combinations have been created and this is called the ‘breath print’ of the disease.

Trials on 1,400 people produced a success rate of 86 per cent, which is considered low in scientific assessment. Success rates must be higher before the procedure can be given the green signal so further experiments are being carried out.

The theory that diseases can be detected through our breath dates back to Hippocrates but it has taken years of research and technological innovation to find the combination of compounds that can decode a disease. We know that the volatile organic compounds exhaled in the breath of patients with lung disease identifies lung cancer. This can be done as early as in the first stage, according to an experiment carried out by an Israeli scientist, Dr Hossain Haik. The electronic nose was able to detect the malignant lung tumour and the accuracy was noted to be 90 per cent.

This has proved tremendously useful as when lung cancer is identified in the early stages, treating it is easy, while in later stages it is fatal. The idea of the electronic nose emerged from the need to diagnose lung cancer early. Bad breath is a universal problem. An estimated 50 million people suffer from bad breath. But is that a sign of a serious disease?

There is an oral-systemic link between the mouth and the pathogens in the body which emit smells which are an indication that something is wrong within. Bad breath is usually due to lack of proper hydration, not properly cleaning the oral cavity so that food rots on the sides of the gums, and not gargling, but 10 per cent of the problem is caused by different diseases in other parts of the body.