The actors were seen soaking in the best of the city as they relished on 'Banarasi Paan'. 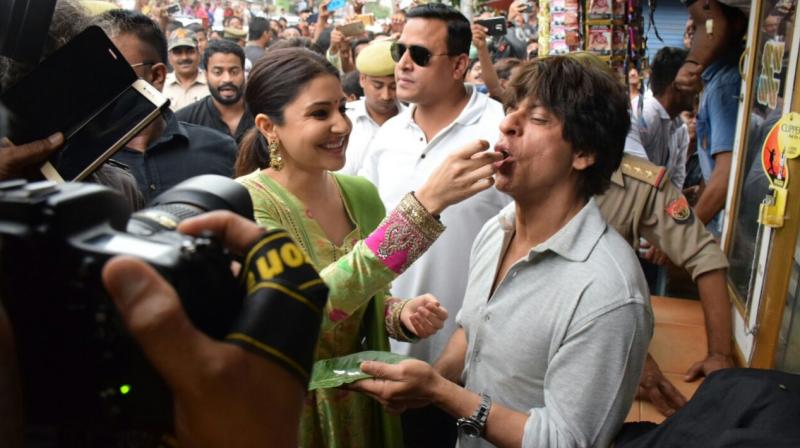 Shah Rukh and Anushka enjoying the sweet-flavoured Benarasi paan on the streets of Benaras.

Shah Rukh has been touring across India in his true 'Guide' avatar from 'Jab Harry Met Sejal'. In his latest destination Banaras, King Khan was accompanied by his co-star Anushka Sharma aka Sejal and director Imtiaz Ali.

The actors were seen soaking in the best of the city as they relished on 'Banarasi Paan'.

While driving through the streets of the city, SRK along with Anushka and Imtiaz made an impromptu stop at a local betel leaf vendor's shop to taste the flavour the city of Banaras had to offer.

The trio were pleasantly surprised to learn that the shop was a 70 year old, named 'Tambulam Paan shop'. They then savored on 'chilled meetha paan' from the age old vendor.

The 'Jab Harry met Sejal' team relished the 'paan' and basked in the love from the residents of the city, who were surprised on spotting the Bollywood stars on the streets.

Savoring the Banarasi treat Shah Rukh was overheard thanking the vendor for the delicious meetha paan.

Sharing his experience of the visit Shah Rukh Khan tweeted, "Harry, Sejal & Imtiaz had a great time in Varanasi... thank u all for coming & big thanks to @ManojTiwariMP #JHMSInVaranasi"

Harry, Sejal & Imtiaz had a great time in Varanasi... thank u all for coming & big thanks to @ManojTiwariMP #JHMSInVaranasi pic.twitter.com/rapadJg5F3

'Jab Harry met Sejal' team have been on a promotional spree and are visiting cities across the country to connect with the masses. After visiting Ludhiana, Jalandhar, Jodhpur and Jaipur, the team went all the way to Varanasi.

Presented by Red Chillies Entertainment, 'Jab Harry met Sejal' is directed by Imtiaz Ali. The film is all set to release on August 4.