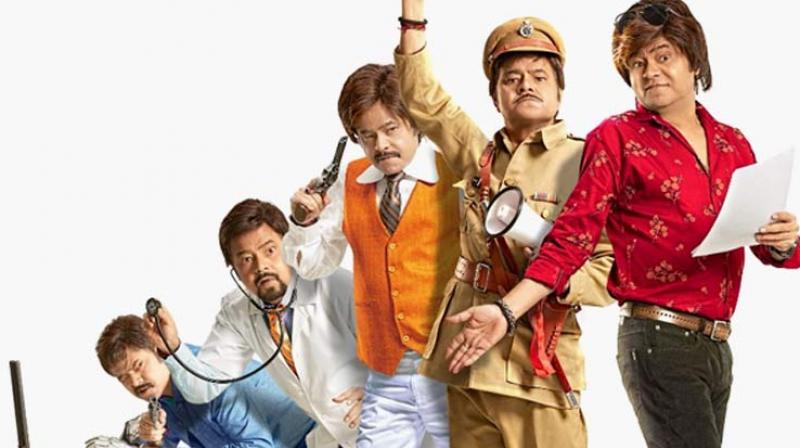 Hardik Mehta’s Kaamyaab - a tribute to forgotten supporting actors of Bollywood- see Sanjay Mishra’s character Sudhree comparing a ‘side-actor’ to an aalu (potato) as both are easily adaptable.

Relegated to the fringes of stardom in Bollywood, these character actors slip into diverse avatars rather effortlessly without any distinctive identity. So if in Noorie, Avtar Gill was Bharat Kapoor’s friend, in Dhan Daulat a factory worker.

“Initially we didn’t have a choice, beggars can’t be choosers. I did one film with Mahesh Bhatt, Kabzaa, where he cast me as a corrupt cop who eventually turns good. People liked that role and after that, I become a stereotype and was cast only as a cop,” recalls Gill who must have done around 50 films playing either a commissioner or an inspector, out of which 27 were with the Sadak filmmaker Mahesh Bhatt.

During the 80-90s period of the Hindi cinema, there was no dearth of work for side actors like Birbal Khosla, Manmauji, Liliput or Guddi Maruti. However, most often than not, it was their role that went under the knife on the editing table.

Gill explains that back then films had set parameters, a hero, heroine, villain, mother, father and so on. “Since the characters were fixed, we had to see where we could fit. If we are not fit for father then were pushed to be the lawyer, if not that then a doctor,” adds the actor who became a household name with TV serial Nukkad as the famous as Kadir Bhai.

For Guddi Maruti – best known for her comedy roles- the road to screen was unexpected. She was in seventh standard when Jaan Hazir Hai was under production and required an actor to play the heroine’s friend. “Just because I was tall and on the heavier side the director convinced my father to let me act as the heroin’s friend,” recalls the actress.

But it was after Preeti Ganguly’s sudden weight loss that roles all the ‘fat girl’ roles started coming her way. “Sau din Saas ke was half shot, only the comedy scenes and the song Moti Palley Pai Gayi, which Preeti was to shoot, as left to shot. But since she lost weight and Sadanahs (Director and Producer) were family friend they coaxed me to do the film,” smiles Maruti who calls 80-90s the golden era for character artists.

“At that time around 500 movies were made and all had a sidetrack for a character artist. As a character artist, I have seen the best time of an actor’s life,” she adds. And having learned from Preeti Gangulay’s mistake, Maruti decided to stick to her curvy aesthetics’.

The actress shares that back then while films were done on verbal promises the shooting was an improv ground. “Jagdeep uncle was also in the first few films that I did, so he would guide me. Mehmood uncle too used to give his inputs. As a character actor, we got to learn and improvise from legends. After a point, most of our acting was improvisation and hardly anything was as per the script,” shares Maruti.

Featured in Limca Book of Records for doing over 1000 films, the baldhead and smiling Manmauji Mishra recalls that his friend, like Jagdeep, used to warn him that he is wasting his time as the director will only cast actors. But he didn’t give up.

“In Prem Bandhan there is a scene where Rekha comes to the shop. In that scene, I had to stare at her body with malice. After the scene, Ramanand Sagar came laughing, patted me on the back and praised. Such acting expressions were appreciated,” he reminisces, adding, “In another movie, a death scene required people standing in the background. So the director refused to let me stand, he said ‘meri shakal dekh kay he hassi aate hai’.”

But for Liliput Faruqui, it was the stereotyping that forced him to move away from the industry. A born performer, Faruqui rejected all offers entailing comedy based on his height and gradually drifted towards the television.

“There I got to do various roles, my caliber was not limited to just my height. On TV I did serious and comedy both but films never gave me that satisfaction,” says the writer of TV series like Vikram Vetaal and Dekh Bhai Dekh.

Moreover, he clarifies that he never wanted to be in Manmouje and Birbal’s category. Faruqui recalls that in the very beginning an assistant of Basu Chatterjee told him that because of his height he wasn’t fit for hero or heroine's brother or father.

Though Maruti enjoyed her time as a tall over-sized friend or sister, but after a time it did bring stagnation. “Initially it was a boon. After the sixth movie, I told Pahlaj Nihalani ji that I don’t want to do the friend’s role,” recalls the actress.

For Birbal Khosla, Kaamyaab is the absolute reality of a character actor’s life. “We are such actors, that no matter even if the film we worked in was a hit, our price remains the same. We are like the kanda (onion) and baatata (potato),” laughs Khosla who worked in films like Upkar, Roti Kapda Aur Makaan and Kranti to name a few. The veteran actor shares that, if the length of the film increased, the strength of the character actor’s role decreased.

Recalling an incident Faruqui shares, “I got one role in Sagar which was very performance-oriented but the entire scene got edited.” And though the banners of Pramod Chakravorty's Azad carried Manmauji’s name, his entire role was chopped. “He avoided me for six months,” laughs the 76-year-old.

Manmauji notes that now Asrani or Jagdeep are portraying roles once done by him. Gill opines that the current situation of character actors is much like how Sudheer (Sanjay Mishra) is treated in the movie.

He further notes that though the industry has become organised with casting directors in place, it is not helping the veterans. The yesteryear side actors are all praises for the directors of this generation, but point out that they either lack the visualisation of them in a role or simply don’t remember them. Maruti feels that actors today are blessed.

“Like Kamyaab has Sanjay in the lead role. Even someone like Bhumi Pednekar in Dum Laga kay Haisha is such a refreshing role. The directors are open to casting anybody in different roles, maybe I too would have done a challenging role,” she concludes.