The younger generation would perhaps remember him as the father of Salman Khan in the film Andaz Apna Apna. 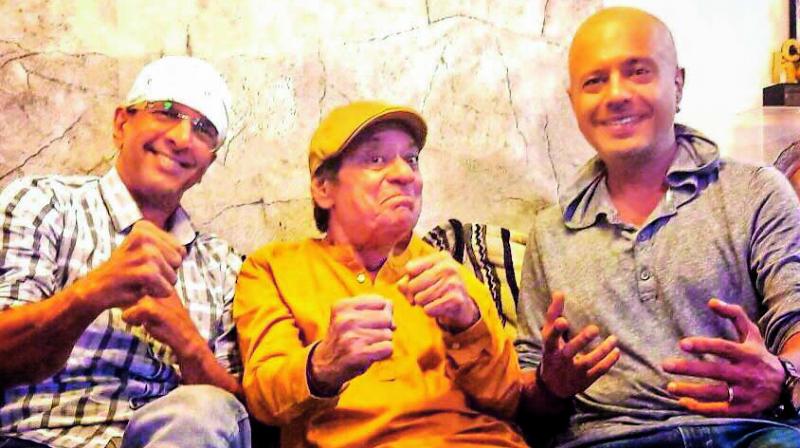 Jagdeep often spoke about how Dilip Kumar helped him a lot in his career.

Moving to Mumbai from Datia state with his widowed mother after Partition, eight-year-old Ishtiaq preferred to work on the road and go to night school.

Spotted by an assistant director who later became ‘the’ Yash Chopra, Ishtiaq became Jagdeep playing a Darwan in B.R. Chopra’s Afsana in a school play. His three-rupee fee became six and he had arrived because he could speak chaste Urdu.

A role in Sheikh Mukhtiar’s Annadaata, which impressed the filmmaker so much that he was referred for a film called Dhobi Doctor by Phani Majumdar.

Playing a young Kishore Kumar with Asha Parekh was the little girl opposite him, he cried through the film impressing the filmmaker as well as Bimal Roy, who saw the rushes and cast him as the shoeshine boy Laloo Ustad in Do Bigha Zameen.

Paid a handsome Rs 300 for the character of Laloo, he went on to work with Guru Dutt as well in Aar Paar. Footpath, Bhai Saheb, Danka, Laila Majnu, Munna, Chalis Baba Ek Chor and Railway Platform also followed. He turned hero with AVM’s Bhabhi opposite Nanda.

Jagdeep often spoke about how Dilip Kumar helped him a lot in his career. Then there was Sholay and the character of Soorma Bhopali became very famous, but not many people would know that Jagdeep was called to shoot for the film after it had been completed. He tried to make a film called Taat Ka Parda but had to shelve it. He used a song from the film in another film called Soorma Bhopali where he got many stars including Amitabh Bachchan to work in it. The film had quite a delayed release.

One of his most popular roles was also in the Mithun Chakraborty super hit film Suraksha where his dialogue Khamba Ukhadke became a hit and he repeated that in another film as well.

The younger generation would perhaps remember him as the father of Salman Khan in the film Andaz Apna Apna.

Jagdeep is survived by his sons Jaaved Jaaferi and Naved Jafri and their families. His grandson Meezan made his debut last year with the Sanjay Leela Bhansali produced Malaal.

The late Jagdeep had once told us that his role in Sholay was added as an afterthought. To which director Ramesh Sippy explains, “You know, he loved to tell some stories and the media loves such stories.

In reality, the entire script of Sholay was locked before we went to shoot. In fact, we did have to edit out a lot of portions. But his portions stood out really well. Jagdeepji was an actor of great calibre. It was quite a memorable experience working with him. It is sad that an actor of his calibre is no more, His timing was immaculate. The best part about him was his timing in comedy which is extremely difficult. While I am not saying that drama is easier than comedy, but his timing was perfect. I was very honoured to be a part of the lifetime achievement given to him last year (at the IIFA awards).”