Karan Johar was chosen to give Rajini the award, and the filmmaker had nothing but praiseworthy things to say. 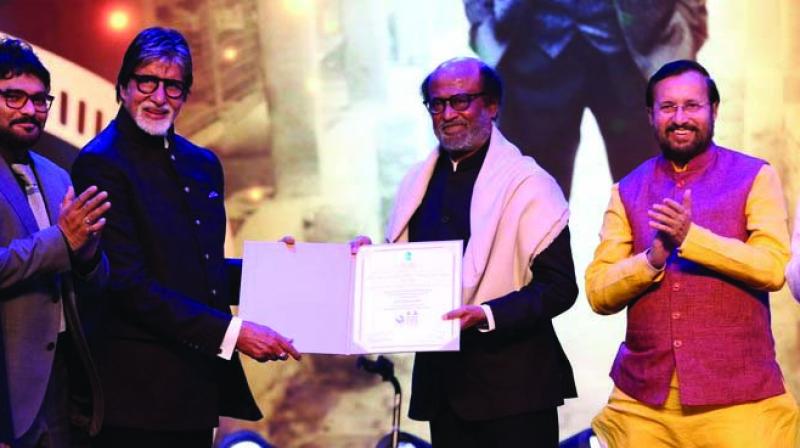 Cinematic legend Rajinikanth was given the ‘Icon of Golden Jubilee Award’ at this year’s International Film Festival of India for his contribution to the Indian cinema.

Cinematic legend Rajinikanth was given the ‘Icon of Golden Jubilee Award’ at this year’s International Film Festival of India for his contribution to the Indian cinema. This is the first time that this award was given out, in honour of the 50th edition of IFFI.

Karan Johar was chosen to give Rajini the award, and the filmmaker had nothing but praiseworthy things to say. “After making his humble debut in 1975, there has been no looking back for him. In every sense, he is the symbol of Indian Cinema; his unique and inimitable performance with every single character that he performs on screen has inspired billion people. His characters have given a voice to voiceless. His humility and grace are what he stands for,” Karan gushed.

The actor was humble as ever while receiving the award as well. “My inspiration is Amitabh Bachchanji; I am extremely happy to receive this International Film Festival Of India—Icon of Golden Jubilee Award. My heartfelt thanks to the Indian government for honouring me with this prestigious award. I dedicate this to all the producers, directors, and technicians who worked on my films. Above all, I would like to thank all my fans,” he said amidst roaring applause.