Kaifi's son-in-law, veteran writer-lyricist Javed Akhtar, confirmed the news of the death of the theatre and film actor. 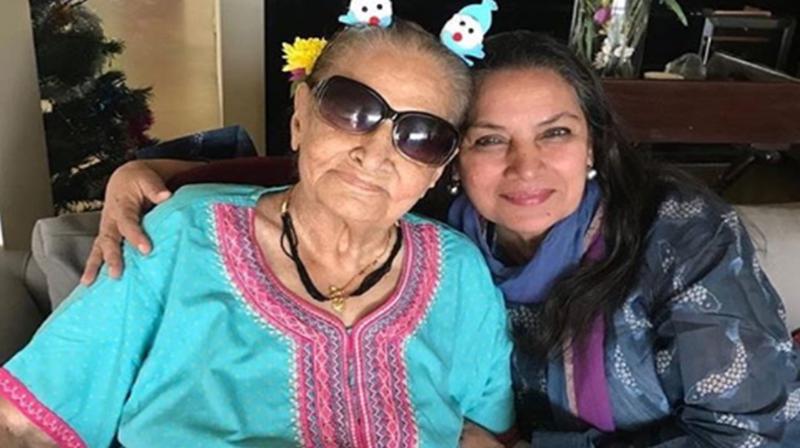 Mumbai: Veteran actor and Shabana Azmi's mother Shaukat Kaifi passed away here on Friday evening due to age-related illness at the age of 93. Kaifi's son-in-law, veteran writer-lyricist Javed Akhtar, confirmed the news of the death of the theatre and film actor. "She was 93 and was having one problem after another. She was admitted to Kokilaben Dhirubhai Ambani Hospital. For certain days she was in the ICU and then she was out of ICU. It was all age-related," he said.
"Ultimately they brought her home. She wanted to come back to her own room where she stayed for a day or two and then passed away. Shabana is in Mumbai," Akhtar, who is in the US, told PTI.

The last rites will be held on Saturday noon. Kaifi's husband was the celebrated Urdu poet and film lyricist, Kaifi Azmi. She and her husband were leading lights of the Indian People's Theatre Association (IPTA) and the Progressive Writers Association (IWA), which were the cultural platforms of the Communist Party of India. Besides Shabana Azmi, Kaifi is also survived by son Baba Azmi. Also credited as Shaukat Azmi, Kaifi's acting credits include "Bazaar", "Umrao Jaan" and Mira Nair's Oscar-nominated film "Salaam Bombay!".

Her last film was Shaadi Ali's "Saathiya". After Kaifi Azmi's demise in 2002, she wrote an autobiography, "Kaifi and I" which has also been adapted to a play "Kaifi aur Main". It premiered in Mumbai in 2006 on the fourth death anniversary of Kaifi Azmi. The play has been performed by Shabana Azmi and Akhtar. Actor Dia Mirza and theatre personality Danish Husain also condoled the demise of Shaukat Kaifi, saying her contribution to art will always be remembered. Kaifi was part of a huge progressive group in post-Independence India, and with her death the chapter is now closed, Akhtar said.

"It was a huge group of progressive people in Bombay in the '50s and '60s. They included Reshma Chugtai, Vishwamitra Adil and others. Many of them were poets, theatre personalities and writers. Shaukat Kaifi was one of the most important theatre actors. She was the last one to pass away," he told PTI.

Akhtar said the book "Kaifi and I" accurately depicts the life led by Kaifi. "She wrote the book about her life and that became a bestseller. On reading the book, one gets to the lives those people lived, their struggle for their ideals and goals," he said. Theatre personality Danish Husain, who recently acted in the play "Kaifi Aur Main", said it helped him get a "peek into her sensitive soul" and that he was "extremely heartbroken" to hear about her demise.

"I have only seen one performance of her, 'Garam Hawa' and that was good enough to indicate her force as an actor on stage. She was instrumental in keeping IPTA running and was the glue that kept the Azmi household together. Words fail at these moments. Condolences & love to @AzmiShabana @babaazmi @Javedakhtarjadu @tanviazmi," he tweeted.

Dia Mirza told PTI, "Shaukatji's legacy, her life will continue... a fellow Hyderabadi, a feminist, a woman of formidable force and gentleness... she was everything every person would hope to be. She will live on in all our good work, in all our triumphs and failures. She would always say, 'Aadab beta, khaana khaake jaana'."