The woman I admire most is gone: Shabana Azmi

The actress, who was at home with her mum when the end came, also looked back at losing her father, legendary poet Kaifi Azmi. 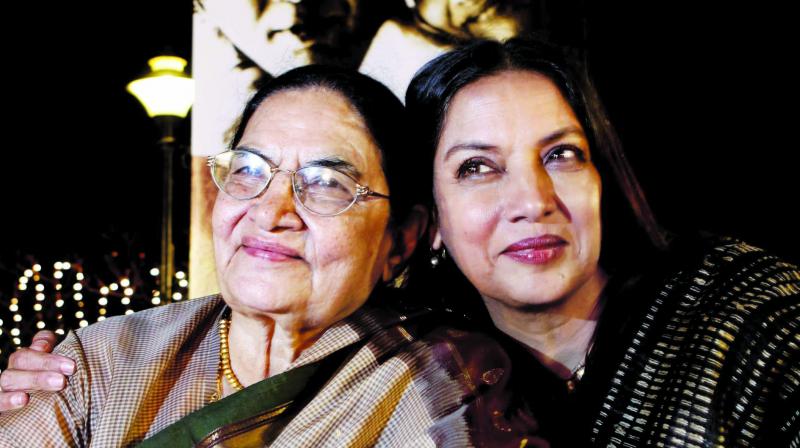 On Friday evening, legendary theatre personality, activist, and actress Shaukat Kaifi passed away. She was 93, and still spirited to the hilt when it came to her two favourite topics: theatre and sarees. She had been ailing for quite some time, but the loss has not diminished for Shabana and her brother Baba by any means.

Shabana had once said about her mother, “The woman I admire most is my mother Shaukat Kaifi. My mother, who is a very respected theatre artist, was working with Prithvi Theatre and used to strap me to her back as a four-month old child and carry me to work because we couldn’t afford a maid. When I was about three years old, I started accompanying her on her tours during vacations from school. I would go to sleep backstage with the smell of greasepaint all around me.”

The actress, who was at home with her mum when the end came, also looked back at losing her father, legendary poet Kaifi Azmi. Not one to show her feelings, she had said in a choked voice, “Losing a parent is difficult, but I didn’t realise how painful it was until it actually happened.”

The bond between mother and daughter was evident. Some time ago, Shabana laughingly said: “Mashallah, Shaukat Kaifi is my mother, my child, and my friend. Warm, compassionate, generous to a fault, but brutally frank. Her memory is failing, but she remembers lines from a play that she did at age 10! She continues to be a fabulous hostess. Her love for sarees has only increased with time. When (Nobel laureate) Amartya Sen wrote a glowing review of her memoir Kaifi & I, she bought 16 sarees for herself at one go. When I gasped that I had never done that in my life, pat came her answer, ‘Well, Amartya Sen has never praised you during your life so far. My mom is a riot! I thank her with all my heart.  By the way, I honestly think she would rather have me gift her a saree than speak so sentimentally about her.”