‘Emotions compel me to write music’ 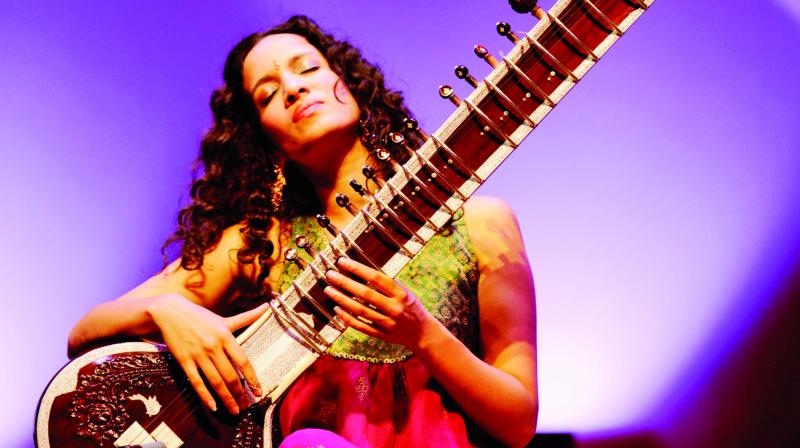 Having released her first Extended Play Love Letters earlier this month, six-time Grammy Award-nominated sitarist Anoushka Shankar is all set to embark on a two-city tour, performing songs from her EP and celebrating her father, the late Pandit Ravi Shankar’s 100th birthday. Her first stop will be in the maximum city tomorrow, followed by Delhi on Friday.

A personal touch
For an artist, their craft can guide them and also give their emotions a new creative form. And Shankar’s EP, a collection of songs written by her and in collaboration with female artists, covers topics personal to her like the female experience in relationships, marriage and motherhood.

“It’s a collection of love songs and meditations on heartbreak, loss, and rising through the pain. Lovable featuring Ibeyi was the first single I released from Love Letters late last year. Followed by Those Words, Bright Eyes and In This Mouth, both featuring Alev Lenz. The EP also contains two songs featuring Alev, called Wallet and Space,” lists the 38-year-old, whose homecoming has been over two years in the making.

However, the music producer maintains that not all the songs are entirely biographical. “A lot of the songs were written whilst my marriage ended. It’s more like the process of a relationship ending inspired me to write some sad, introverted or contemplative songs, as is so common for musicians. I suppose it's a different layer of personal for me to be sharing music that's been influenced so directly from my own romantic experiences,” says the sitarist.

After a long phase of being absorbed in her divorce and her health, Shankar is happy to be back. “I had a double surgery — a hysterectomy plus abdominal surgery to remove additional tumours. I’m blessed to have a strong support network and I know things would have been much harder without them. So I had to get through the prior commitments which were booked before my marriage ended, but I decided I couldn’t take on any more than was already in the diary as I needed to be with my kids. I’m very happy to finally be returning now,” she smiles.

While she has written from a personal place before — like on her 2013 album Traces Of You that has songs to do with her father's passing, or Traveller from 2011 that chronicles her motherhood experience — Shankar as a musician has always kept the subject of romance separate. “This time it felt like these are huge, big, bright experiences into which I needed to dive musically as well. It was because of my experiences that I needed to look at this entire topic,” adds the mother of two.

Pushing boundaries
Hailed as a sitar virtuoso with talent for displaying the versatility of the instrument, Shankar has garnered fame for her emotional and fiery playing style, and compositions with intense rhythmic interplay and instruments. For someone who made her debut as a professional sitarist at the age of 13, and by 20 released three solo recordings, the musician in her 25-year-long career as a live touring sitarist has also come to merge the two worlds of classical and contemporary flawlessly. A reflection of which can be seen in her combination of the cello and sitar.

“It is one example of how disparate elements can come together in a really beautiful way,” explains the composer, adding, “I incorporate a lot of influences in my music and it does the music a disservice to simply break that down into ‘Indian classical’ and ‘Western’ music. I try to make music that is authentic and honest in relation to who I am and what I am feeling. I also, try to approach various musical forms with as much respect as possible so they are each used well.”

While stronger emotions compel her to write, Shankar draws her inspirations from humans, nature, and the higher energy that runs through them. At the same time, she keeps close to her heart the examples set by her father. “He always practised intensely before concerts. He took the time to really focus and centre himself before going onstage. Every single show was important, even after decades of performing and thousands of shows. He was never casual about a smaller city, for example. That commitment and discipline were amazing,” says the musician.

An ode to Father
Talking about the two-city tour, Shankar has put together a specially curated band specifically for this music. “We will play the new songs from the EP as well as versions of my older works. It’s an intimate setting, and very personal,” smiles Shankar. Since this year is mainly about her father’s Centenary, she will be performing on stage with her half-sister, musician Norah Jones, for the first time to mark the occasion.

“We are doing special concerts and events around the world. We kick off in London on what would’ve been my dad’s actual birthday with a gala concert featuring various musicians. We then tour America. I’ll play more tribute concerts worldwide, multiple museums and cultural centres will feature exhibitions about my father. Ultimately, we will conclude the celebrations with special performances in India featuring special guests and many of my father’s incredible disciples,” smiles the sitarist, who has made unforgettable memories in India, which she also calls her home.

“It’s hard to pick out memories. I lived and went to school in Delhi for several years, and the Capital remained a base throughout my teenage years and 20s. I also have a deep relationship with Kolkata and Chennai due to my Bengali and Tamil parents. Then, of course, is Mumbai, where I have so many friends in the art world; Bangalore, where I have family; and Goa is where I spent so many winters,” recalls Shankar befor signing off.