A reel of melodies

We began our interaction with the Academy Award and Grammy Award winner by asking what took him so long to turn a producer. 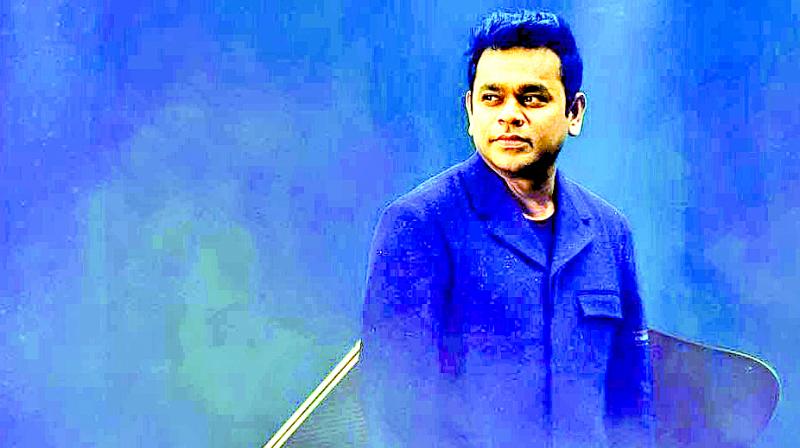 In an exclusive interview with The Asian Age, legendary music composer AR Rahman talks about donning the hats of a co-writer and producer for  his maiden film 99 Songs.

99 Songs, the maiden film co-written and produced by composer AR Rahman, is a Hindi romantic musical set to release in India in 2020. The premier of the film, which is directed by Vishwesh Krishnamurthy and stars Ehan Bhat and Edisy Vargas, has been held at the 24th Busan International Film Festival. No prizes for guessing who composed the original scores and songs in the movie though!

We began our interaction with the Academy Award and Grammy Award winner by asking what took him so long to turn a producer.

“I think when you begin shaping something it takes its own time,” says Rahman with a smile. “So it was with respect to shaping my music company via the movie. Then, getting the right storytellers and the right partners and collaborators takes time too, also because we all have to achieve the common goal — to make something beautiful. And now that we have crossed the ocean, we are more than happy.”

In the process of this creativity, Rahman laid the foundation for a completely new experience. Once he had written the story, he began searching for a director, after which they found the financier. “I got investments from Canada, which I am grateful for. After this, we set out on the search for our male and female leads, and then sent them out for a year’s training. We found Jio, after which Sony came in too,” he says, adding that the entire team is expecting good results and that he is hoping that the film is successful at the box office.

Future compositions
Rahman is naturally immersed in promoting the film as much as possible, but we wonder if he is composing a little less nowadays.

“No, no,” he says, adding. “I’m composing a lot, but yes, I was doing most of my work in Tamil and have been yet doing another movie titled Le-Musk and not as much in Hindi. However, I am now catching up; I am working with director Anand L Rai as also with director Mani Ratnam.”

So what does music mean to him today, we ask Rahman. “I believe music is the only safe haven given the amount of negativity in the world today,” he tells us. “By creating music, one gets to share that experience with everybody who wants to share it. Music is something that takes you to another hemisphere and brings you hope, even in the darkest of times.”

That makes us wonder what his take is on the amount of remixes happening in the industry. “Yes, I agree, there is just too much of remixes happening now,” says Rahman. “Earlier, one or two remixes happened. Now, it is almost like a necessity despite how people seem to hate the remixes’ zone. That is also why it feels good to release this sound track.”

Talking of which, we wonder why 99 Songs is in Hindi, Tamil and Telugu and not in Malayalam. Rahman just chuckles, his calm demeanour unshaken, he says, “First, let my film release in these three languages. It takes a lot of energy mentoring one project. For instance, though we are done with the dubbing for Tamil and Telugu versions of the film, it is not just dubbing or an act of copy–paste for me. I need it to have in it the flavour of the language such that people can relate to it and love it. But the work that’s gone into the dubbing of this movie has been so impressive given the extremely talented people who’ve worked for it. The Tamil voice, for instance, was dubbed by G V Prakash and Gautham Menon, who mentored the project.”

Talking of films and mentoring brings to our minds one recent unfortunate incident. Kamal Haasan’s film Indian 2 had a very bad spell when a crane fell on and killed a couple of the film’s assistant directors. “It was very unfortunate. My wife and I were shocked and have been trying to reach the director of the film, Shankar, but I can imagine how shaken he must be. The loss of life is unacceptable anywhere and I hope people are much more careful,” he says, adding how he built his AM studios with extra care, which is also where the shooting for this movie happened too. “Every inch of the place is constructed with utmost care and amended five or six times so that nothing falls or causes any kind of accident because life is precious, and no one should ever be a victim for carelessness.”

Away from the film talk, we can’t help but ask Rahman about the befitting reply his daughter Khatija Rahman gave author Taslima Nasreen about her attire, the burkha. “I am proud of her,” says Rahman. “She is mature enough to handle her problems and does not need my support. Having said that, she has respect for everyone and at the same time, she is a strong woman too. I’m proud she did what she did.”