'Wanted to do something good for society,' says T'gana officer who was assaulted

She was released from the hospital on Monday where she had been admitted after sustaining severe injuries in the attack. 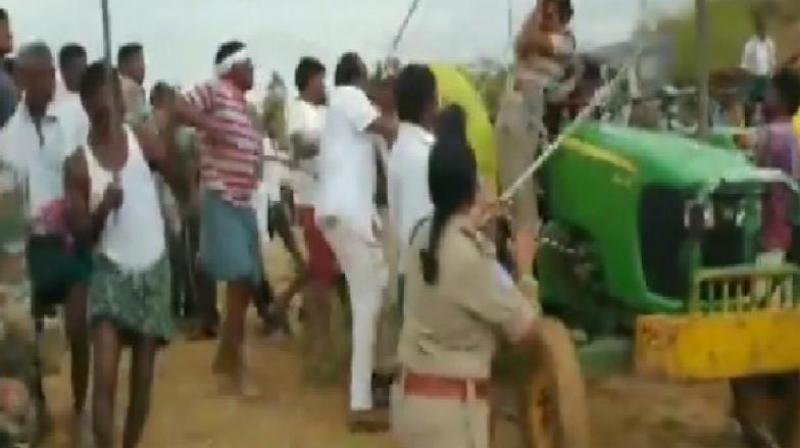 Videos showed the officer being accosted by a mob as she tried to get off a tractor. (Photo: ANI)

Hyderabad: Telangana forest officer C Anita, who was assaulted by a local TRS leader when she went to plant trees, on Monday broke down while recounting the attack, reported NDTV.

She was released from the hospital on Monday where she had been admitted after sustaining severe injuries in the attack.

Videos showed the officer being accosted by a mob as she tried to get off a tractor.

"I came all this way through my sheer hard work, studied in a government school and had the intention to do something good for the society. I have respect for my uniform. All the respect was to do something for people by wearing the uniform. And I was assaulted. I strongly condemn this," she told the reporters, breaking down.

She identified Koneru Krishna, the vice chairman of the Zila Parishad, who is also the brother of the local legislator Koneru Konappa.

Admitting his role, Koneru Krishna stepped down from the post and in a letter he said he had done it "for the people".

Sixteen people, including Koneru Krishna, have been arrested and more are likely to be taken into custody.

Earlier, giving details of the incident, Inspector General of Police Nagi Reddy said: "A gang of around 30 people led by Krishna attacked forest officials who had gone to Sarasala village in Khagaznagar to plant saplings on land allotted for forest development near Kaleshwaram project."

Krishna had said, "The forest department is terrorising Adivasi farmers and confiscating their land forcefully. I was there to resolve the issue and to ensure justice for tribals as forest officials were destroying their crops in the name of afforestation. I tried to pacify department authorities but in vain. The attack was accidental, not intentional."