According to NASA, the November mosaic had the best pixel scale (0.7 metre) and lighting conditions (72 degrees incidence angle). 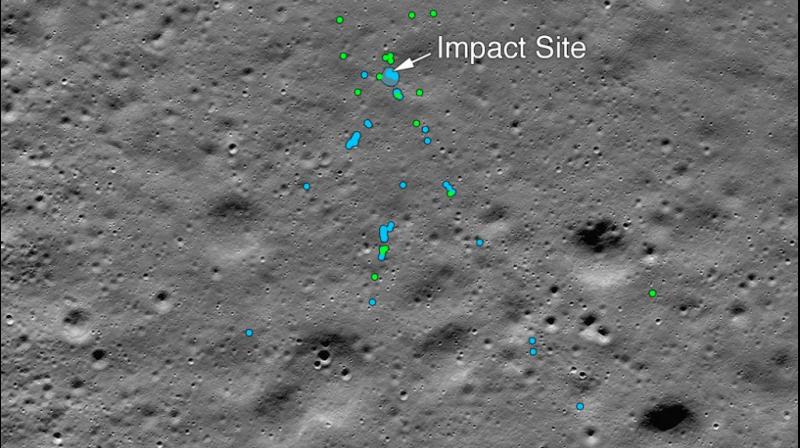 NASA's Moon-orbiting spacecraft has found the debris of Chandrayaan 2's lander Vikram on the surface of the Moon, the US space agency confirmed on Tuesday, nearly three months after India's ambitious mission made a hard landing near the uncharted lunar south pole. (Photo: Twitter/ NASA)

Washington: NASA's Moon-orbiting spacecraft has found the debris of Chandrayaan 2's lander Vikram on the surface of the Moon, the US space agency confirmed on Tuesday, nearly three months after India's ambitious mission made a hard landing near the uncharted lunar south pole.

On September 7, Indian Space Research Organisation (ISRO) attempted a soft landing of Vikram on the Moon. However, ISRO lost contact with Vikram shortly before the scheduled touchdown.

The Lunar Reconnaissance Orbiter (LRO) Camera team released the first mosaic, acquired on September 17, of the site on September 26. Indian Engineer Shanmuga Subramanian contacted NASA's project after which, the US space agency confirmed the identification of debris by comparing before and after images.

The #Chandrayaan2 Vikram lander has been found by our @NASAMoon mission, the Lunar Reconnaissance Orbiter. See the first mosaic of the impact site https://t.co/GA3JspCNuh pic.twitter.com/jaW5a63sAf

"After receiving this tip, the LROC team confirmed the identification by comparing before and after images. When the images for the first mosaic were acquired the impact point was poorly illuminated and thus not easily identifiable," NASA said in a statement.

The two subsequent image sequences were acquired on October 14 and 15, and on November 11, NASA said. The LROC team scoured the surrounding area in these new mosaics and found the impact site (70.8810 degrees South, 22.7840 degrees East) and associated debris field.

According to NASA, the November mosaic had the best pixel scale (0.7 metre) and lighting conditions (72 degrees incidence angle). "The debris first located by Shanmuga is about 750 meters northwest of the main crash site and was a single bright pixel identification in that first mosaic," NASA said in a statement.

The November mosaic shows best the impact crater, ray and extensive debris field, NASA said, adding that the three largest pieces of debris are each about 2x2 pixels and cast a one-pixel shadow. Ever since ISRO lost contact with Vikram, NASA has made several attempts to locate the Chandrayaan-2 lander with the help of its Lunar Reconnaissance Orbiter.

The LRO flew over Vikram's landing site once on September 17 and next on October 14. The ambitious Chandrayaan-2 mission to the Moon was launched in July. If the spacecraft had reached the surface in one piece on September 7, India would have been only the fourth country to successfully put a lander on the Moon.