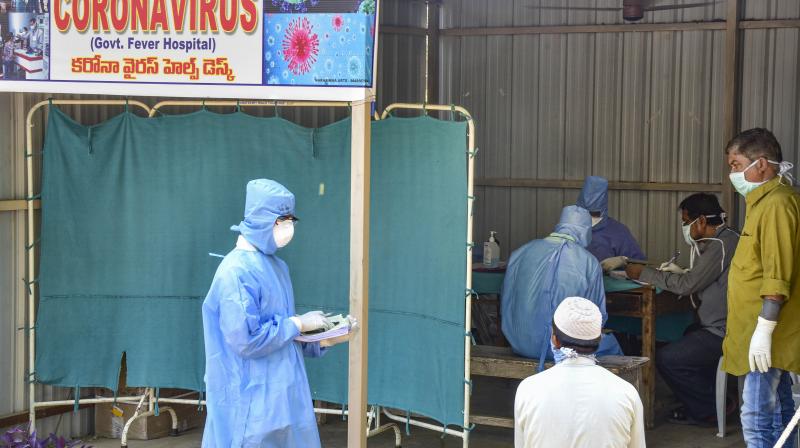 Hyderabad: Drivers and technicians of 108 ambulances have alleged that they are being forced to work without any personal protective equipment (PPE).

Speaking to Deccan Chronicle, several drivers complained that though they are putting their lives at risk while transporting coronavirus positive or suspect cases, their managements are not providing PPE kits, masks or even sanitising solutions to them. A few drivers said GVK EMRI, which runs the ambulance service, terminates their jobs if they complain about this issue.

Three days ago, two GVK EMRI teams, each comprising a driver and an emergency medical technician, were sent into quarantine for coming in contact with Covid-19 positive patients.

One of the teams picked up a family of four from Gadwal, one of whom had later tested positive for the virus. The team that transported the family and the driver who operated the vehicle were asked to report for quarantine the next day.
One of the drivers in quarantine, speaking on condition of anonymity, said, “We were given no PPE kits or masks; even the family we transported was not given them either.” Many of the staffers are afraid of going on record for fear of being sacked.

Mr Mahender, one of the few drivers willing to go on record, said he has been off the roster since March 12. He narrated his account as follows: “I have been assigned to the Kothagudem division. On March 11, I was asked to drop a patient and report to Palvoncha to transport a coronavirus case. I refused as I had no PPE kit or mask with me. That was the last day of my duty.”

Mr Mahender said most drivers and emergency medical technicians (EMTs) are expected to work without asking questions. “If you are given a case, you must go without asking any questions. You can’t ask for any extra equipment. If you do, you will be fired,” he said.

Mr Ashok Palle, president of 108 Employees Association, said several staffers like Mahender have been laid off for asking questions in the past month. “Officially, only 108 ambulances are supposed to transport Covid-19 positive/suspect cases. But no one cares about the staff’s health. They are expected to travel in the same vehicle as a coronavirus positive patient. But they can’t ask for PPE kits,” he lamented.

Mr Palle, a former 108 employee himself who has been jobless since a year owing to his union activities, said the staff’s duties have become tougher after the pandemic. “There are only a little over 1,500 drivers and EMTs in the state who run 350 ambulances. Due to shortage of staff, they have to serve 12 hours a day for six days every week. This is much higher than the prescribed 48 hours limit,” he pointed out.

The union leader said he has written to almost all district collectors in the state seeking help. “I have also written to the CMO and health department, but haven’t received a satisfactory response,” he said. He charged that GVK EMRI does not acknowledge the employees’ union, even though it is a registered body recognised by the labour department.

Chief operating officer (COO) of GVK EMRI P. Brahmananda Rao denied these allegations. He said the organisation was in possession of over 1,000 PPE kits and the government itself was supplying such kits to drivers. “We have ensured that each vehicle has 10 PPE kits for their usage. As a precautionary measure, we are asking only drivers to attend to these cases as EMTs are not required,” he pointed out.

Mr Rao denied that any of GVK EMRI’s employees are under quarantine. When asked about the employee from Gadwal, he said this wasn’t true. “We did have one EMT who was sent to quarantine. But that was because he went to Gandhi Hospital during off-duty hours. Other than that, we have no other cases,” he said.

The driver in quarantine, when informed of Mr Rao’s response, scoffed and said, “Of course, they will deny everything. Even his claims about PPE kits are bogus. I can guarantee you not a single ambulance, at least in Gadwal and Wanaparthy area, has even one PPE kit.”