Mother says she has received justice; thanks cops, media & neighbours for support. 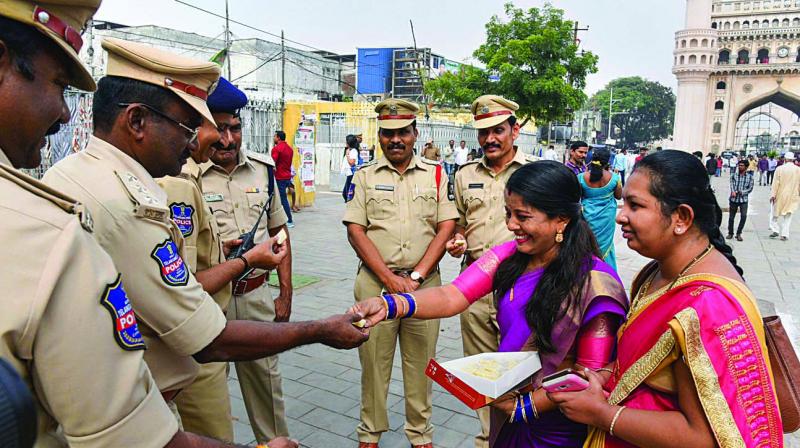 Women offer sweet to police personnel as they commend the police in Hyderabad on Friday for its strong action against the four accused in the gangrape and murder of a 25-year-old veterinarian. (Photo: PTI)

Hyderabad: The family of the veterinarian who was brutally raped and murdered on November 27 have hailed the “encounter” killing of Mohd Arif, Jollu Shiva, Jollu Naveen and Ch. Chennakesavulu, the four men who had been arrested for the crimes.

Her father told this newspaper at his residence on Friday: “True justice is impossible for us — our daughter will never come back. But today’s incident (the encounter) has alleviated some of our pain.”

The sister too had similar views. Speaking to the media, she said, “I did not expect there would be an encounter. I thought a trial would go on for a few months and (perpetrators) would be sentenced to death. But today’s stringent punishment will help prevent similar crimes in the future.”

The mother of Disha, the name given to the vet to protect her identity, spoke to the media for only a few minutes in the morning. “We have received justice. I thank the police, media and the residents of our colony for their support,” she said, struggling to find the words she was looking for. While praising the state police, she brought up the victim of the 2012 Delhi gangrape. “I did not think we would ever get justice. Nirbhaya’s family still hasn’t got any justice. I told everyone nothing would happen, but Telan-gana police has proven me wrong,” she said.

It was through television news channels that the family came to know on Friday morning about the ‘encounter’ in which policemen shot all four suspects on the grounds that they were trying to escape. Within a couple of hours, the extended family too had come in to offer their moral support. Until late in the afternoon, Disha’s father and sister were in the apartment complex’s open area, talking to media persons who were eager for sound bites. Visibly exhausted, Disha’s father pleaded with reporters to let him go home. “I have said the same thing multiple times already. Do you really want me to say it again?” he asked a reporter with a cameraman in tow. He obliged after the reporter insisted.

One of the reporters asked him what he thought of people who were criticising the encounter. “That is their prerogative. I won’t be able to comment on that. I leave it to their judgment,” he said.

Once upstairs, the family seemed to have their first moment of peace in several days of intense media attention. Though the grief was palpable, there was also a sense of peace in the house. The family members, around 20 of them in total, were watching TV in the living room, flipping through news channels. Some of the channels were showing interviews of people sitting in the room.

Israel gives robots and other medical equipments to AIIMS