Fire at Mumbai's Butcher Island continues after 36 hrs, efforts on to douse blaze 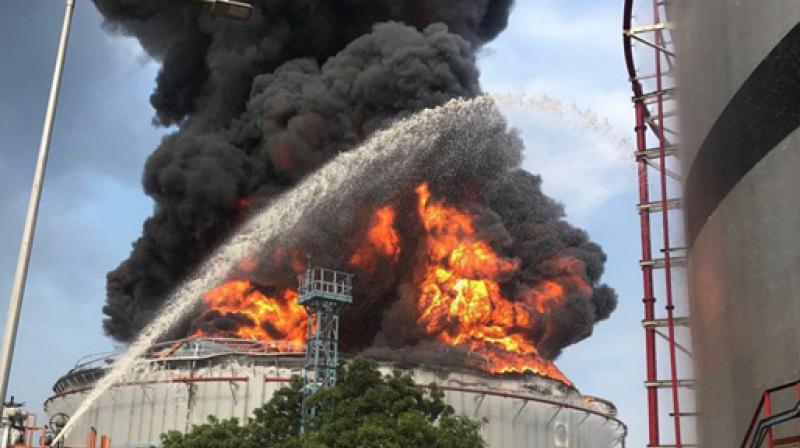 The island, which is located close to the Elephanta Island in Thane, has an oil terminal used by the port authorities, where crude oil is stored in oil containers. (Photo: ANI)

Butcher Island (Maharashtra): Efforts are still underway to douse the fire that continues to rage at the Butcher Island near Mumbai even after over 36 hours.

By using thermal imaging camera, the fire authorities have now got to know that now around 7000 kilolitre diesel is left in that tank, and it will take about 10 to 12 hours time to burn the remaining fuel in the tank.

The temperature at the base is 60 to 80 degrees and at superficial, the burning level is 700 to 900 degrees.

All surrounding tanks are being decanted from the accidental place to avoid any further unwelcome situation.

The Personal Protective Equipment (PPE) helmets are being used with wiser glass, which is protecting the face of the fire-extinguishing personnel.

On Friday evening, a major fire broke out as two fuel storage tanks containing petrol and diesel caught fire at the Butcher Island.

The island, which is located close to the Elephanta Island in Thane, has an oil terminal used by the port authorities, where crude oil is stored in oil containers.

According to Manohar Rao, Executive Director and Head of safety, BPCL, the prima facie cause of the fire was lightning.

Rao also said that a probe into the incident will be carried out.