Donald Trump hints at trade deal with India during visit

The US first couple will visit New Delhi and Ahmedabad during their visit. 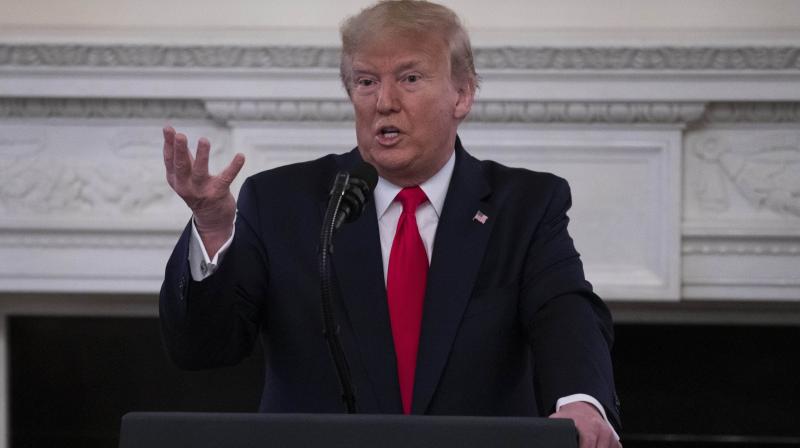 New Delhi: Seeking to raise anticipation and excitement over his forthcoming visit to India later this month, US President Donald Trump has indicated that his country could sign a trade deal with India if it is the “right” one, adding there could be “five to seven million” people in Ahmedabad welcoming him at the newly-built massive Motera Cricket Stadium there. Speculation is rife that President Trump and Prime Minister Narendra Modi will jointly address a huge public rally there. Meanwhile, in remarks that are significant given the recent controversy over the Citizenship (Amendment) Act in India and concerns on that raised by the US earlier, Mr Modi tweeted that both nations had a commitment to “democracy and pluralism”, adding that President Trump and his wife Melania would be given a “memorable welcome” by the people of India.

Both India and the United States had formally announced on Tuesday that the US President, accompanied by the First Lady, would make a two-day visit later this month to India on February 24 and 25. The US first couple will visit New Delhi and Ahmedabad during their visit.

The US had also revealed in its statement that both Mr Modi and President Trump had spoken to each other over the weekend.

According to reports from the US, President Trump was quoted as saying on Tuesday evening (Wednesday-IST): “They (Indians) want to do something and we’ll see... if we can make the right deal, (we) will do it.” The US President was further quoted as saying, in comments to the US media: “I am (going to India). He (PM Modi) said we will have millions and millions of people. He thinks we will have 5-7 million people just from the airport to the new stadium.”

In a lighter vein, perhaps in reference to the “Howdy Modi” rally in Houston, Texas, last year that was held to welcome Mr Modi in the US, President Trump — who spoke at that rally — was also quoted as saying: “When we have 50,000 people, I’m not going to feel so good; we’ll have five to seven million people just
from the airport to the new stadium (in Ahmedabad). And you know it is the largest stadium in the world. (They are) building it now. It’s almost complete and it’s the largest in the world.”

Praising Mr Modi, he added: “I look forward to going to India. He (Prime Minister Narendra Modi) is a friend of mine. He’s a great gentleman.” After President Trump’s comments, Mr Modi tweeted: “Extremely delighted that @POTUS @realDonaldTrump and @FLOTUS (President Trump and his wife Melania) will visit India on 24th and 25th February. India will accord a memorable welcome to our esteemed guests. This visit is a very special one and it will go a long way in further cementing India-USA friendship.”

Mr Modi added: “India and the USA share a common commitment to democracy and pluralism. Our nations are cooperating extensively on a wide range of issues. Robust friendship between our nations augurs well not only for our citizens but also for the entire world.”

Both countries said on Tuesday in separate statements that the visit would strengthen the Indo-US strategic partnership. Speculation is rife that a trade deal may also be signed during the visit, something that will be music to the US President’s ears as he heads into his domestic re-election campaign.