First train with 1,000 passengers arrives in Bengaluru from Delhi

These travellers will be taken to the quarantine centres to complete their quarantine period. 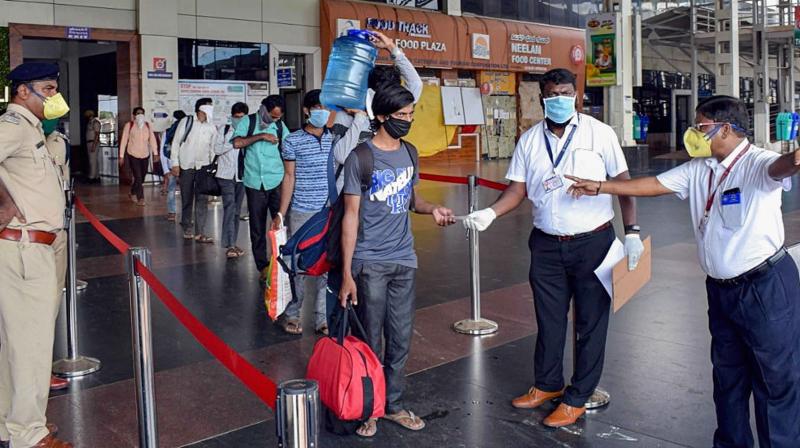 A file image of passengers being allowed to board a train after clearance at Hubballi. (PTI)

Bengaluru: Around 1,000 passengers arrived in Bengaluru from Delhi on Thursday on board the first train to Karnataka since limited rail services resumed in the country, officials said.Soon after arrival at the Bengaluru City Railway Station, the passengers were screened for COVID-19 on the station premises itself, the officials said.

The train that left Delhi on Tuesday at 9.30 pm was scheduled to arrive at 6.40 am on Thursday but got delayed by 40 minutes.

According to a senior railway officer, the Bengaluru civic agency along with the Karnataka Health Department had set up 10 health check-up counters to screen the passengers.

The passengers were disembarked coach-wise as Railway Protection Force personnel kept a strict vigil on them. "It's heartening that everyone is maintaining discipline and seated inside. No chaos," the South Western Railway public relations officer said.

These travellers will be taken to the quarantine centres as the state government has decided not to allow them mingle with anyone else till they complete 14 days in isolation and test negative for COVID-19, the officials said.

Around 15 buses belonging to the Bangalore Metropolitan Transport Corporation (BMTC), a subsidiary of the state government, were deployed at the railway station to take these passengers to the quarantine centres.

Elaborate arrangements were made to receive these passengers. As many as 4,200 rooms were booked in 42 hotels around the Majestic Railway Station.

"We have reserved 90 hotels in and around the railway station. These are for institutional quarantine. The passengers willing to stay in these hotels will have to bear the cost. Separate arrangements have been made for those who don't wish to stay in hotels," the Deputy Commissioner of Bengaluru Urban district G L Shivamurthy said in a video message.

He made it clear that everyone coming to Bengaluru will have to compulsorily remain quarantined for 14 days and undergo COVID-19 medical tests. General public was not allowed to enter the railway station area.