India's covid figures modest for the size of population: Experts 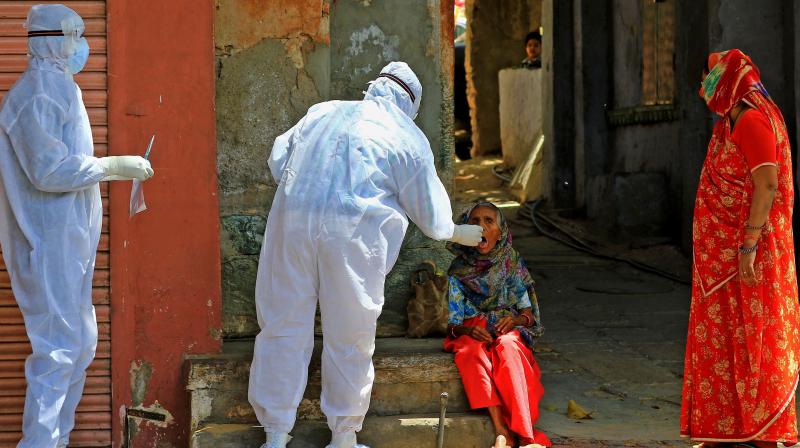 A medic collects a swab sample of an elderly woman during a door-to-door examination of COVID-19 amid a nationwide lockdown imposed in the wake of coronavirus pandemic in Jaipur. PTI photo

New Delhi: India needs to "significantly ramp up" the number of tests done across the country to trace COVID-19 infection if the virus is to be contained in time, experts said.

The death toll due to coronavirus rose to 414 and the number of cases to 12,380 in the country on Thursday, according to the Union Health Ministry.

While the number of active COVID-19 cases is 10,477, as many as 1,488 people have been cured and discharged and one had migrated, it said.

Experts feel the figures are modest for a count of the size of 1.3 billion and "much more number of tests" are needed to combat COVID-19 outbreak in the country.

According to worldometers.info which maintains a global database on coronavirus cases and tests conducted, the US, where over 26,000 COVID-19 deaths have occurred, has done 31,00,387 tests averaging about 9,367 per million of population.

The figures for India is 2,44,893 tests averaging 177 per million of population.

Spain and Italy, two countries which have also seen several thousands of fatalities, have done 6,00,000 and 10,73,689 tests respectively.

Dr Ravi Shekhar Jha, Senior Consultant and Head of the Department of Pulmonology at Fortis Escorts, Faridabad, said India is going in the right direction but it is not enough.

"Given the massive size of our population, the number of tests needs to be ramped up and should be conducted more rigorously. We need to do effective contact tracing and test them so that those people in turn do not infect others," he told PTI.

The number of samples tested till March 28 stood at 27,688, a rise of 7,038 from the corresponding figure till March 27, according to ICMR data.

"The rise in number of cases happening is also because in the last few weeks during the lockdown, people who came in contact with affected people were traced and tested. This has to be increased manifold if we have to contain coronavirus in time, otherwise it will be a difficult affair," Jha said.

Dr Sandeep Budhiraja, Group Medical Director at Max Healthcare, said it has been decided to conduct coronavirus tests on "all our workforce and patients across the country".

"Priority will be to test our admitted patients and new patients being brought in. And, the front-line healthcare workers," he said.

India is doing lot of tests, but it is not enough compared to what the US and Singapore and other countries are doing, he said, adding, "much more testing needs to be done".

Another expert from a leading private hospital here, who did not wish to be named, said, "The volume of tests conducted need to be ramped up significantly to capitalise on the gains from the lockdown".

Two kinds of diagnostic tests are being currently used in India -- RT-PCR test and rapid antibodies test, according to global health norms.

Dr Arvind Kumar, noted lung surgeon at the Sir Ganga Ram Hospital, said the key to fighting the COVID-19 battle is "testing, testing and testing" and then "quarantining and treating".

"The more number of people we screen, the greater our chance of winning this fight against COVID-19. The number of tests have to be significantly increased," he said.

"Number of cases were rising and they will increase even more now, as more testing is done. We are still on the rising limb of the epidemic curve. Also, people are learning social distancing, sneezing etiquette, which are important elements in this fight," said Dr Rajesh Chawla, a pulmonologist at Apollo Hospital.