The dramatic footage shows how the family, including their young child, sat on top of the car which was almost submerged under water. 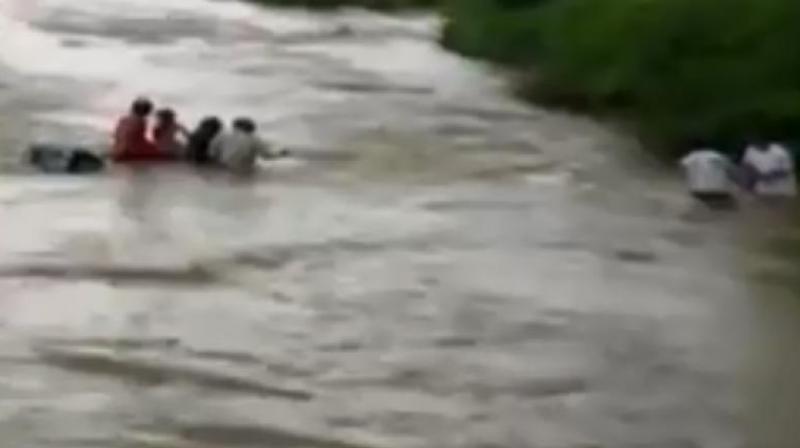 Ashraf Khalil Shaikh, his wife Hamida and two children were safely rescued by local villagers before the car could be washed away. (Photo: ANI/screengrab)

Navi Mumbai: A family of four was miraculously rescued from a swollen river in Navi Mumbai's Taloja on Monday. The heroes who led this rescue operation were the locals who rushed to the family's aide as they struggled to stay afloat.

The dramatic footage shot by locals and shared by news agency ANI shows how the family of four, including their young child, sat on top of the car which was almost submerged under water.

Locals rescued the family with the help of a rope and were pulled out safely one by one. According to an NDTV report, 37-year-old Ashraf Khalil Shaikh, his wife Hamida and two children were safely rescued by local villagers before the car could be washed away.

#WATCH Locals pull a family to rescue using a rope after the family's car was submerged in water, in Navi Mumbai's Taloja #Maharashtra (16.07.18) pic.twitter.com/bD7ubV7xnN

The family was crossing a bridge in Ghotgaon area of Taloja when Sheikh steered to the left to let another vehicle pass. He lost control of the car and it plunged into the river, reported Hindustan Times. As it was raining, the car was swept in even further due to the strong currents.

Workers at a construction site nearby spotted the car and gathered locals to help the family. According to reports, the family escaped with minor injuries and received timely medical aid.