This was Delhi's first encounter with an Internet shutdown. 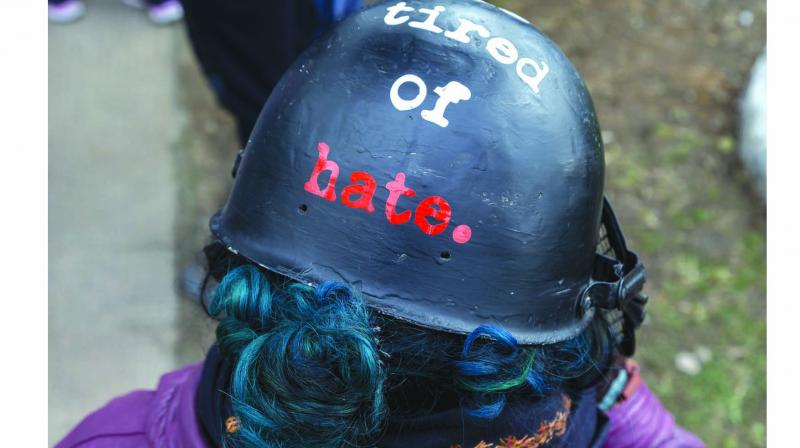 A woman wears a helmet with the words ‘The World is Tired of Hate’ in Dharmshala on Thursday.

Hyderabad: Many residents of New Delhi, the nation's capital, realised on Thursday that they could no longer access the Internet through their phones. Network providers such as Airtel and Idea-Vodafone later told media outlets that were ordered to suspend Internet services in some parts of the city. This was Delhi's first encounter with an Internet shutdown.

In the past week, due to country-wide protests against the Citizenship Amendment Act (CAA) and National Registry of Citizens (NRC), Internet services have been suspended in many parts of the country. Assam, for instance, has not had Internet for over a week

The country’s metros — Delhi, Mumbai, Chennai, Kolkata, Hyderabad, Bengaluru and Pune — have largely been unaffected by them. However, this is no longer true.

In the past week, two of these metropolitan cities — Delhi and Kolkata — have seen Internet shutdowns.

In parts of Kolkata metropolitan area, services have been down since December 15.

Mr Prashanth Sugathan, volunteer legal director with the Software Freedom Law Centre (SLFC), said the imposition of Internet shutdowns in metropolitan cities is unprecedented. “This is the first time we have got reports of shutdowns in Delhi. It is concerning. The Internet is vital for the survival of cities like Delhi,” he said.

In the past, during the Maratha agitation in August 2018, a shutdown was imposed in Pune district, but only in some rural pockets. In Navi Mumbai, in the same month and for the same reason, Internet services were suspended for a few hours. None were imposed in the economic centres of either city.

Mr Srinivas Kodali, a city-based cybersecurity researcher, said, “Internet shutdowns are supposed to be for public emergencies. They are being misused, only to stifle dissent. That shutdowns are being imposed in metros is very alarming.”

Mr Kodali said cities like Hyderabad and Bengaluru, which have a bustling IT sector, would be brought to their knees if they face Internet shutdowns.

“This fact is actually just as alarming. A vast majority of this country’s population uses only mobile Internet. The livelihoods of many — delivery persons, small business and so on — depend on it,” said Mr Kodali.