The government's attempts to muzzle justice & break their faith are deplorable, said the Congress general secretary 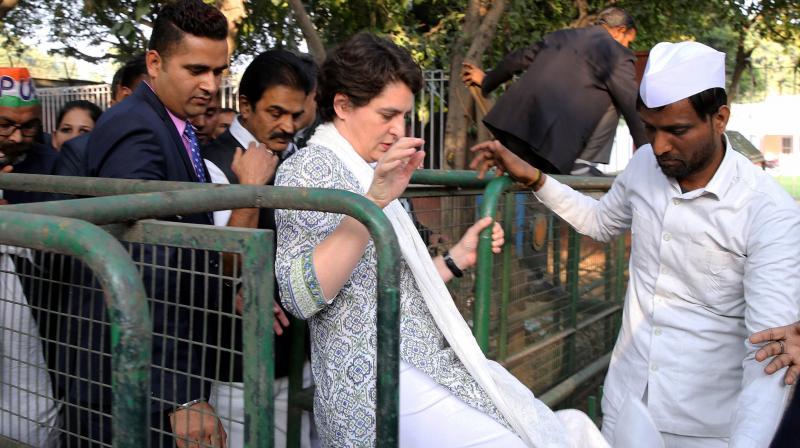 AICC General Secretary Priyanka Gandhi Vadra along with party workers during a peace march against the communal violence in North-East Delhi area. PTI

The Congress on Thursday hit out at the government over the transfer of Delhi High Court Judge S Muralidhar, alleging that the Modi dispensation was waging a battle of revenge against the judiciary.

Muralidhar was transferred to the Punjab and Haryana High Court, on a day when a bench headed by him expressed “anguish” over the Delhi Police's failure to register FIRs against alleged hate speeches by BJP leaders Parvesh Verma, Kapil Mishra and Anurag Thakur.

Loya, who was hearing the high-profile Sohrabuddin Sheikh fake encounter case of Gujarat, died of cardiac arrest in Nagpur on December 1, 2014, when he had gone to attend the wedding of a colleague's daughter.

Upping the ante against the Modi government, Congress general secretary Priyanka Gandhi Vadra said the Centre's attempts to “muzzle” justice and “break people's faith in an upright judiciary are deplorable”.

“The midnight transfer of Justice Muralidhar isn't shocking given the current dispensation, but it is certainly sad & shameful,” Priyanka Gandhi tweeted.

“Millions of Indians have faith in a resilient & upright judiciary, the government's attempts to muzzle justice & break their faith are deplorable,” she added.

Calling the transfer a classic “hit-and-run injustice” by the BJP government, senior Congress leader Randeep Surjewala said the saffron party's “politics of revenge” has been exposed.

“It seems those doing justice in country will now not be spared,” he said at a press conference here.

“Delhi HC Judge S Muralidhar transferred by the government to save BJP leaders in Delhi violence case,” he alleged.

In a late night development on Wednesday,Delhi HC Judge S Muralidhar was transferred to the Punjab and Haryana High Court, days after the Supreme Court collegium made the recommendation.

The judge was hearing the Delhi violence case and the late evening notification came on the day when a bench headed by him expressed “anguish” over the Delhi Police's failure to register FIRs against alleged hate speeches by three BJP leaders.

A notification issued by the Ministry of Law and Justice states that the president took the decision after consulting the Chief Justice of India.

The notification, however, does not mention when he has to take the charge of his office.