The overall 979 cases in the country includes 48 foreigners, stated the health ministry 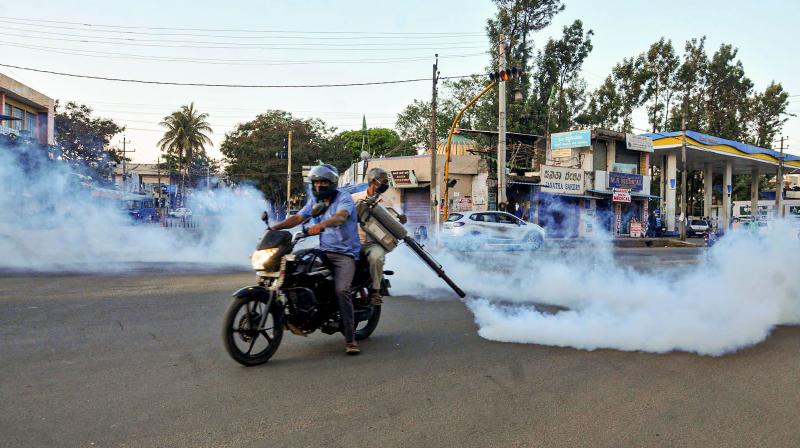 Health workers spray disinfectant during a nationwide lockdown in the wake of coronavirus, in Chikmagalur. PTI

New Delhi: With fresh deaths in six states, the death toll from COVID-19 climbed to 25 and the total number of cases to 979 on Sunday, according to the Union Health Ministry.

The ministry reported one death each from Delhi, Gurjarat, Karnataka, Kerala, Maharashtra and Telengana.

Maharashtra has reported the highest number of COVID-19 cases so far at 186, including three foreign nationals, followed by Kerala at 182, including eight foreign nationals. Maharashtra also has the highest number of deaths at six followed by Gujarat (4), Karnataka (3), Madhya Pradesh (2), Delhi (2) and one each from Kerala, Telengana, Tamil Nadu, Bihar, Punjab, West Bengal, Jammu and Kashmir and Himachal Pradesh.

In Telangana, the number of cases has gone up to 66, including 10 foreigners while Karnataka has reported 76 cases till now.

The number of cases in Rajasthan has climbed to 54, including two foreigners.

Uttar Pradesh has reported 55 cases, including a foreigner while in Gujarat, it has gone up to 53, including one foreign national.

In Tamil Nadu 42 people, including six foreigners, have tested positive, while the number of positive cases in Delhi has gone up to 39, including a foreigner.

Punjab has reported 38 cases, while 33 COVID-19 cases have so far been detected in Haryana, including 14 foreigners.

Uttarakhand has six cases, including a foreigner. Himachal Pradesh and Odisha have reported three cases each. Nine cases have been reported from the Andaman and Nicobar Islands. Goa has reported three coronavirus cases.

Puducherry, Mizoram and Manipur have reported one case each.