In a tweet, sharing the cartoon, Crasto wrote in Marathi, 'There is a proverb...Hanging over your head.' 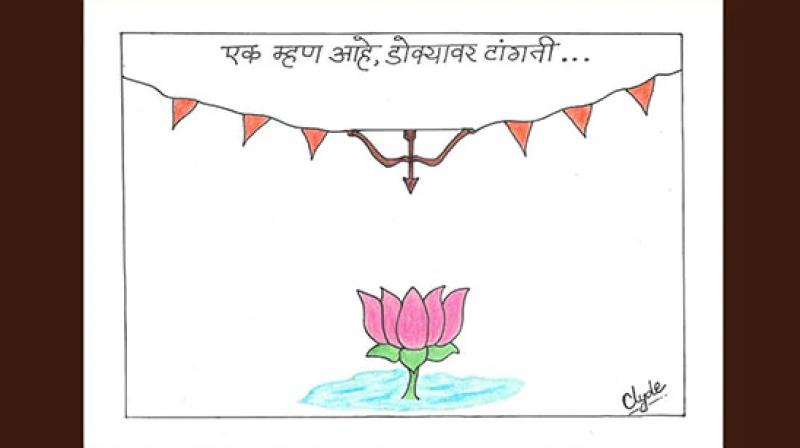 The cartoon seems to be a jibe on the reported tug of war between Sena and the BJP over government formation in Maharashtra. (Photo: Twitter)

Mumbai: NCP spokesperson Clyde Crasto on Tuesday shared a cartoon in which he drew the Shiv Sena's symbol bow and arrow, appearing to hang overhead and pointing directly at BJP's party symbol, the lotus.

The cartoon seems to be a jibe on the reported tug of war between Sena and the BJP over government formation in Maharashtra.

In a tweet, sharing the cartoon, Crasto wrote in Marathi, "There is a proverb...Hanging over your head."

BJP and Shiv Sena have been grappling to reach a final settlement regarding the formation of government in Maharashtra.

Chief Minister Devendra Fadnavis on Tuesday said the BJP national president Amit Shah has not given any confirmation about giving the Chief Minister's post to Shiv Sena.

However, he asserted that BJP will lead a stable government with Shiv Sena for the next five years.

"BJP will be leading a stable and efficient government of Mahayuti (alliance) for 5 years. I assure that this will be a BJP-led government. Our party president has confirmed that nothing has been decided on giving CM post to Shiv Sena. No formula has been decided yet," Fadnavis told reporters in Mumbai.