On July 13, 1931, as many as 22 Kashmiris were killed in firing by the Maharaja's army outside Srinagar’s central prison 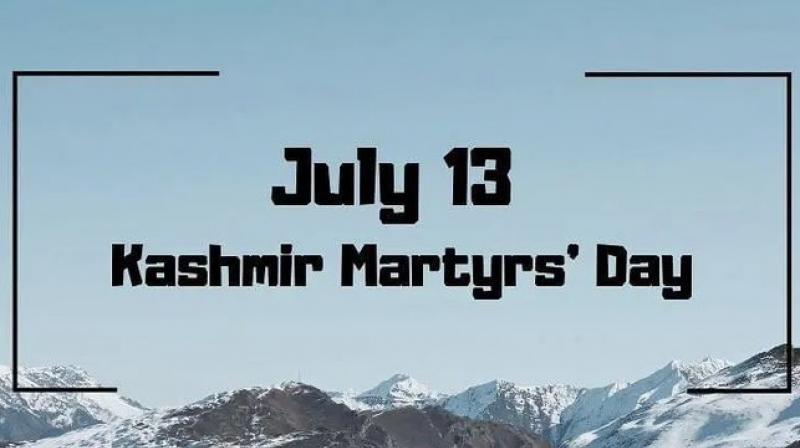 For the first time since 1947, Kashmir martyrs' day will not be observed at official level in Jammu and Kashmir.

It has been reliably learnt that no official event will take place in J&K on Monday to commemorate the occasion. Also, it is not yet clear if a government representative will visit the ‘Mazaar-e-Shohada’ in Srinagar’s Khawaja Bazaar area to pay obeisance to the martyrs of July 13, 1931 or not.

Last year, Khurshid Ahmad Ganai, one of the advisors to the then Governor, Satya Pal Malik, had visited the historic cemetery to offer floral tributes to the 1931 martyrs. He was accompanied by senior government and police officials including the then Divisional Commissioner of Kashmir, Baseer Ahmad Khan, who is now serving as an advisor to the J&K Lieutenant Governor, Girish Chandra Murmu. They too had laid wreaths over the graves of the martyrs and, in order to follow the tradition, a contingent of J&K police had posted the bugle and presented the ceremonial guard of honour to the martyrs.

However in January this year- six months after the erstwhile state was stripped of its special status and split up into two Union Territories on August 5 last year- the government cancelled the gazetted holiday on July 13 in J&K, the decision which evoked widespread condemnation by local political parties.

Greatly disappointed at the government’s decision of withdrawing July 13 as a state holiday to mark the ‘martyrs’ day’, vast sections of J&K Muslims had termed it as an “onslaught” on their ethos and a “deliberate attempt” to “hurt” their sentiments.

On July 13, 1931, as many as 22 Kashmiris were killed in firing by the Maharaja's army outside Srinagar’s central prison where an in-camera trial of famed Abdul Qadeer Khan, a non-local chef with a British traveller, was being held.

Khan had been charged with sedition and instigating people for violence after he made fiery speeches against the Maharaja’s “oppressive” rule at a Friday congregation and while pointing towards his Palace asked people to raze it “brick by brick.”

Since the July 13 would be observed as ‘Martyrs’ Day’ on both sides of the Line of Control (LoC) at official as well as unofficial levels. July 13 continues to be a public holiday in PoK where, reports suggest, the authorities are planning to observe the day with “extra zeal” this time in view of the J&K government decision of withdrawing the official holiday on July 13.

Meanwhile, various J&K mainstream political parties including National Conference (NC) and People’s Democratic Party (PDP) have paid glowing tributes to the July 13 martyr, stating that their role in J&K’s freedom struggle can neither be undone nor forgotten.

“The memory of the 13th July martyrs cannot be erased by changing the government calendar of holidays as they will live forever in the hearts and memories of every freedom loving Democrat,” the PDP said in a statement here. Awami Action Committee headed by Kashmir’s chief Muslim cleric and separatist leader Mirwaiz Umar Farooq said the objective for which the martyrs of 1931 sacrificed their lives has not been fulfilled yet.

It is unlikely that any rallies will be held here or elsewhere in Kashmir on Monday to mark the occasion as lockdown has been re-imposed in major parts of the Valley in view of the spike in Coronavirus cases.

Historian and author Dr. Abdul Ahad reiterated “By all principles of historical propriety, perspective and facts, they deserve to be remembered as martyrs as they sacrificed their lives in the Kashmiris’ fight against feudalism. It happened in 1931 and they were not rebelling against India and the concept of Pakistan had yet to emerge. Such movements against autocracies and feudalism were being spearheaded by people in other Princely states also”.

However, Panun Kashmir and Kashmir Vahini and some other political groups of displaced Kashmiri Pandits allege that July 13, 1931 also marks the beginning of “persecution” of the minority Hindus in the Valley by Muslim majority.  The BJP and like-minded parties having strong base in Jammu, the native place of despotic Dogra Maharajas, consider their rule in undivided J&K as a ‘golden period’ and also maintain that Maharaja Hari Singh was a genuine ruler of the State and the rebellion against was “illegitimate”