A complaint was filed by the Greater Chennai Corporation and the Pallikaranai police have booked the AIADMK leader. 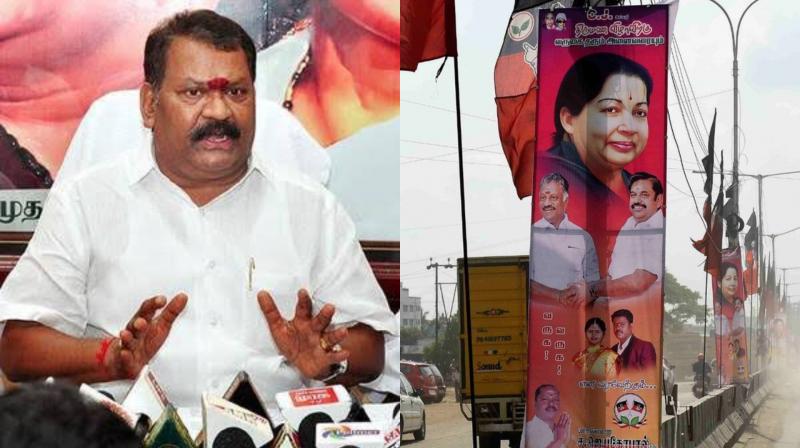 The AIADMK leader – S Jayagopal is a former councillor and Kancheepuran East Mandram Assistant Secretary. Jayagopal erected the hoardings in Pallikaranai to announce the wedding of his son. Deputy Chief Minister O Paneerselvam was also one of the invitees at the event. (Photo: File)

Chennai: Barely hours after the death of the 23-year old engineer Subhasri, the city police has booked former AIADMK Councillor S Jayagopal for erecting illegal hoardings, which led to the loss of the girl’s life, reported The New Minute.

A complaint was filed by the Greater Chennai Corporation and the Pallikaranai police have booked the AIADMK leader. A top police source confirmed that IPC sections 279 (rash driving in public), 336 (act endangering life or personal safety of others) 304(A) (causing death by negligence) have been included in the FIR.

Meanwhile, angered by the continued use of illegal hoardings, several protestors have demanded that Jayagopal be booked under section 304 - punishment for culpable homicide not amounting to murder and not section 304 (A) - death by negligence. While the 304 could attract a prison term of up to ten years, imprisonment for death by negligence could extend only up to 2 years.

However, a top police source said that the current sections are based on the complaint.

“This is based on the complaint. We will decide what other sections would be included at the time of filling the chargesheet based on evidence,” the source confirmed to The News Minute.

The AIADMK leader – S Jayagopal is a former councillor and Kancheepuran East Mandram Assistant Secretary. Jayagopal erected the hoardings in Pallikaranai to announce the wedding of his son. Deputy Chief Minister O Paneerselvam was also one of the invitees at the event.

The poorly erected hoardings stood on either side of the 200-feet Radial stretch along the Thoraipakkam-Pallavaram road and were coming loose according to eye-witnesses. On Thursday, one of the hoardings collapsed on Subhasri who lost her balance and fell on to the middle of the road. The 23-year old B Tech graduate who was on her bike was instantly run over by a tanker lorry which was right behind her.

While Subhasri was immediately rushed to the intensive care unit of a nearby hospital, she passed away after an hour or so. Doctors who were treating her confirmed that Subashri had sustained major injuries to her arms, ribs and shoulder and failed to respond to their treatment.

St Thomas Mount Traffic Investigation Wing had on Thursday arrested the tanker driver and filed a case against him. A case has been filed against Manoj, the driver who hails from Bihar, under various sections of the Indian Penal Code including section 279 (rash driving), section 336 (Act endangering life or personal safety of others), and section 304A (causing death by negligence).

Despite multiple bans and High Court warnings, many politicians and political parties continue to erect hoardings and put up banners for every small event they are associated with. Though people are allowed to erect banners and hoarding after seeking police permission two weeks before, the High Court has repeatedly said that flex banners and hoardings of living persons cannot be put up. On Friday, the Madras High Court slammed the government for failing to implement the orders.