In 2015, the magazine wrote another cover on the Prime Minister titled: 'Can Modi Deliver?'. 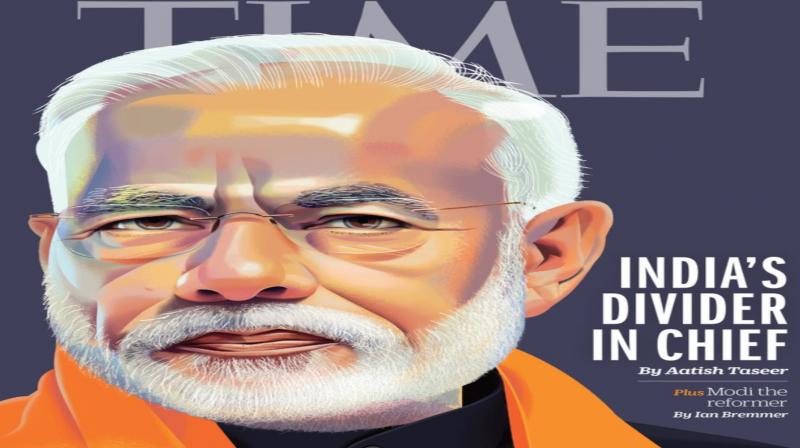 Another story in the same issue lists the achievements of Modi as the leader of India and calls him India's best hope for economic reform. (Photo: Twitter)

The title, which has come bang in the middle of hectic elections in the country, has the strap: “Can the World's Largest Democracy Endure Another Five Years of a Modi Government?"

Another story in the same issue lists the achievements of Modi as the leader of India and calls him India's best hope for economic reform.

TIME has headlined two previous issues on Modi as cover in the last five years. In 2012, TIME carried the cover lead titled ‘Modi Means Business’. It described him as a “controversial, ambitious and shrewd politician”.

In 2015, the magazine wrote another cover on the Prime Minister titled: 'Can Modi Deliver?'.

The Twitterati is divided in opinion on the latest TIME cover.

Here are a few reactions:

Falling Man—Time Magazine and Modi separated over seven years: March 2012, May 2015, and May 2019. THEN AND NOW pic.twitter.com/ieUrlXQgEs

This is what has changed in 5 years. From a hope for Indians, he has become what his supporters would call the Tukde Tukde Chief - a man who divided India. pic.twitter.com/mNHiPfnqcX

What a disgrace. What a fall.@narendramodi you are worst of all.... pic.twitter.com/oTQQzhBfAg

However, some netizens extended unconditional support to Prime Minister despite the changing stances of the international magazine.

Calling it a propoganda, this user tweeted:

This Time issue has 2 articles for 2 perspectives. An unbiased publisher would give equal weightage to both perspectives
But 'India's Divider in chief' makes it to the cover in bold and the other piece 'Modi the reformer' gets only a tiny unnoticeable mention.Why the propoganda? https://t.co/i4tLkjivZ5