'You'll be judged as coward if...,' says Priyanka Gandhi at Bharat Bachao Rally

According to sources, Rahul Gandhi, former Prime Minister Manmohan Singh, and other senior leaders would address the rally. 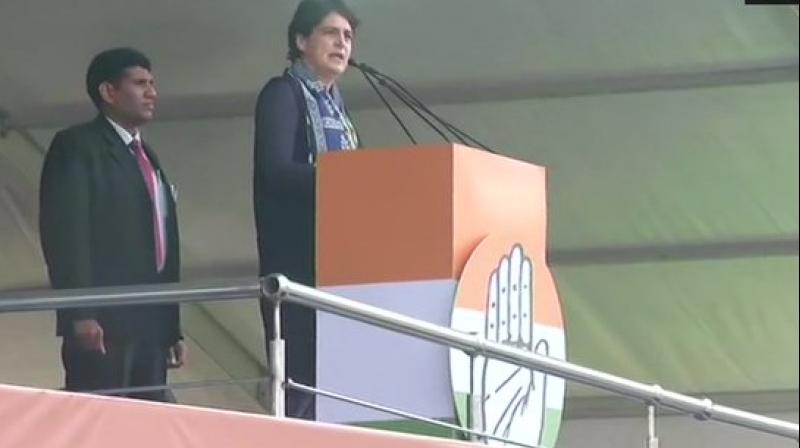 One who doesn't fight injustice in the country will be judged as a coward, Congress leader Priyanka Gandhi said at a party rally here. (Photo: Twitter/ ANI)

New Delhi: One who doesn't fight injustice in the country will be judged as a coward, Congress leader Priyanka Gandhi said at a party rally here.

At the Bharat Bachao Rally (Save India Rally), she said, "One who doesn't fight against injustice in country will be judged as a coward. If we remain silent, our revolutionary Constitution will be destroyed and country's division will start."

Criticising the Citizenship (Amendment) Bill, Priyanka warned the cost of silence against the BJP government’s policies will result in the destruction of India’s constitution.

“I want to tell every citizen of this country - raise your voice. You love this country, become its voice. If we don’t raise our voice, stay back in the darkness of fear and lies even in these circumstances and stay quiet then our Constitution will be destroyed.”

Party workers from across the country would be participating in this rally, which is being organised to highlight several issues including "sluggish economy, rising unemployment, and farmers' problems."

According to sources, Rahul Gandhi, former Prime Minister Manmohan Singh, and other senior leaders would address the rally held at Ramlila Maidan.

The rally of the Congress party was earlier scheduled to be held on November 30 but was later postponed to December 14 in view of the Winter Session of the Parliament, which concluded on Friday.