Of Sangh personalities in power

The orthodoxy that holds together Nilanjan Mukhopadhyay’s 11 doesn’t always translate into liberal economics. 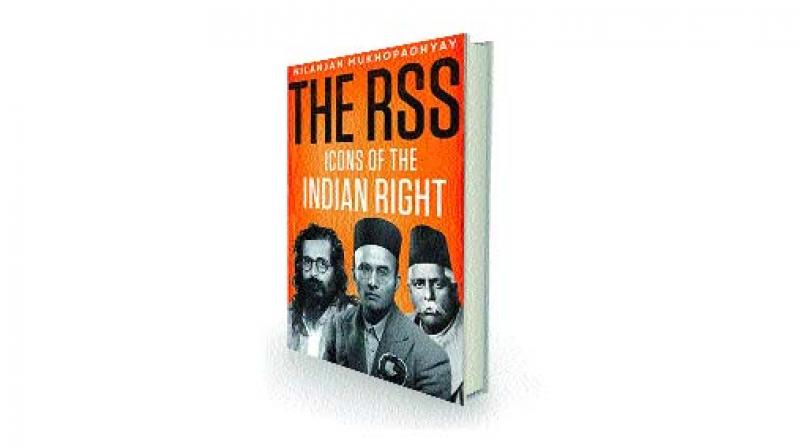 The RSS: Icons of the Indian Right by Nilanjan Mukhopadhyay Tranquebar, Rs 799.

Two aspects of this book strike the reader at once. Adapting a British journalist’s comment on Indira Gandhi, all 11 pen portraits are of people who were (Lal Krishna Advani is the only one still living) well to the right of self-interest. Second, history seems to repeat itself under the saffron sun. If Narendra Modi’s wife is an embarrassment, so was Vinayak Damodar Savarkar’s. If the Babri Masjid was the bone of contention in 1992, it was so in 1893 also. Today’s ghar wapsi can be traced back to the Paravartan campaign that drew on the Arya Samaj’s late 19th century Shuddhi programme which aimed at not just reconverting Muslims and Christians but also at claiming adivasis as part of the great Hindu family.

The orthodoxy that holds together Nilanjan Mukhopadhyay’s 11 doesn’t always translate into liberal economics. They were “right-wing” in the sense of Germany’s Nazis, Italy’s fascists and the various populist movements that pockmark today’s European landscape with a heavy leavening of Hindu myth and mysticism and some straight hocus-pocus. No wonder Singapore’s Lee Kuan Yew was deeply worried when it seemed likely that the Bharatiya Janata Party would be elected to office in 1996. Anxious that a regenerated India should balance China, he arrived hotfoot in Delhi to see for himself. “If your party comes to power, you will also waste four or five years discovering that socialism doesn’t work!” he scolded Atal Behari Vajpayee at a lunch at Hyderabad House. Denying the charge, Vajpayee pointed at P.V. Narasimha Rao whom Lee had hailed two years earlier as India’s Deng Xiaoping, and said, “He has stolen our policies!”

Also at the table, Lal Krishna Advani didn’t try to assure Lee that liberalisation wouldn’t be abandoned. The “forever-in-waiting-PM” later explained that in view of Swadeshi Jagran Manch activism and mounting rank and file opposition to multinationals, the BJP thought it safest to be discreetly silent on reform. Earlier, Advani had turned the same argument on its head to stress the “Indian content” of the BJP’s “economic philosophy” and rebut Rajmata Vijay Raje Scindia’s complaint that the party had abandoned Deendayal Upadhyaya’s “Integral Humanism” and was following in the Congress’s footsteps.

Mukhopadhyay makes no attempt to disguise the self-interest that drove the 11. In one way or another, they seem to have made the most of the opportunities that came their way. The trait accounts for many of the inconsistencies that distinguish Sangh Parivar posturings. Flaunting an anglicised variant of the common Maratha name Thakre, Bal Thackeray’s Shiv Sena with its visceral hatred of “Madrassis” most closely approximated to the chauvinistic militancy of some contemporary European movements. The founder was a curiously complex character. We are not told about Vajpayee’s favourite tipple but Thackeray preferred warm beer. He “idolised” Hitler, hosted Michael Jackson and smoked only Cuban cigars. Even Vajpayee, respected beyond the saffron penumbra, was dismissed by K.N. Govindacharya,  BJP general secretary, as a mukhauta, mask, for hardline Hindutva policies. His non-handling of Mr Modi after Gujarat’s 2002 bloodbath may justify the charge. Vajpayee was not above distancing himself from the freedom movement to ensure his own freedom wasn’t curtailed. For some he was the “right man in a wrong party”. Others saw him as the “wrong man in the right party.”

Balakrishna Shivram Moonje whose protégé, Keshav Baliram Hedgewar, founded the Rashtriya Swayamsevak Sangh, had been a King’s Commission officer in South Africa. Gwalior’s Rajmata would have been a dedicated Congresswoman if the Congress had agreed to obey her haughty diktats. The old Jana Sangh might have merged with the Swatantra Party at one time, and with Janata at another. Mukhopadhyay says Karan Singh wound up that curious hybrid animal, his Virat Hindu Samaj, whose general secretary was the Vishwa Hindu Parishad’s Ashok Singhal (“a mix between a political activist and a self-appointed messenger of god”) only because of the RSS’s eventual refusal to work for a Congress outfit. Syama Prasad Mookerjee appears to be the exception who was guided by principle alone.

These personal trajectories make The RSS: Icons of the Indian Right relevant to the current scene and interesting reading (despite some deplorable printer’s devils) but may not be particularly helpful in understanding Mr Modi or his creed, if there is one beyond wielding power. Vajpayee’s National Agenda for Governance might have aimed at ideological clarity and cohesion but, as Mr Mukhopadhyay says, Nagpur viewed it “as an extension of the steps initiated by P.V. Narasimha Rao and Dr Manmohan Singh.”

Given that the 11 were men for all seasons, all that can be said for certain about their heirs is that NDA governments will continue to follow an aggressive form of folksy Hinduism that bears no relation to Sri Aurobindo’s vision or Sarvepalli Radhakrishnan’s definition but whose sants and superstitions are worshipped in peasant huts in the darkest interior. The party knows that that’s where votes can be mopped up most easily.

Sunanda K. Datta-Ray is a senior journalist, columnist and author.