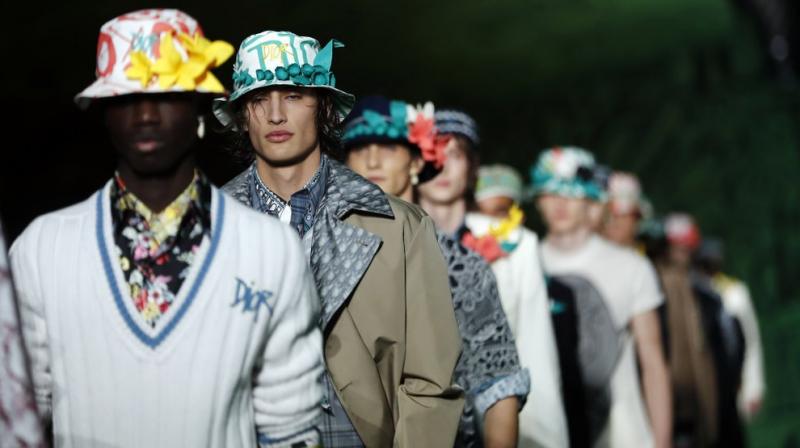 Kim and Kourtney Kardashian, David Beckham and models Kate Moss and Winnie Harlow were among the celebs at the star-studded night which was the most coveted invitation during a week of glamorous parties and art shows surrounding Art Basel Miami.

Over the weekend, hundreds of guests were hand-delivered elaborate plexiglass invitations which opened up to reveal sunset hued fans. On Tuesday, well-heeled guests walked past a line of vintage cars guarded by models dressed in a riff on monochromatic mechanic jumpsuits, before heading into a massive building covered entirely with a reinvented Dior logo designed by Shawn Stussy.

“Conceived as an immersive installation, the show’s scenography plunges the audience into the artist’s universe,” according to a statement from Dior. Even the runway was reminiscent of Miami’s beach scene — an abstract barrel wave lit by sunset, that the fashion house described as a celebration of freedom, movement, creation and spirit.

“Backstage is very calm. We’re not in fashion week so everyone has no busy schedules. We just came for this so we can focus on this,” said 22-year-old model Benno Bulang, who flew in from Germany. The collection’s vacation feels continued with python printed shorts, sweater hoodies and conch shell earrings — relaxed but energetic.

The tourist vibe was punctuated by oversized bags and conch shell earrings. Neon yellow eyeshadow was painted across the models’ eyelids in one bold streak creating a highlighter unibrow. The collection was heavy on florals. Hearty clusters of pastel flowers adorned bob hats, berets and jackets, even double-breasted blazers and suit jackets.

The show was held at a property owned by the Rubell family, across the street from their new Rubell Museum, which officially opens this week, and has been a crown jewel in Miami’s art world. It was also a nod to Dior, who was a gallerist before he was a couturier.

“The house has always cultivated a passionate relationship with art, and this fascination is at the heart of Dior’s inventiveness now more than ever,” according to a statement from the brand. Art Basel seems an easy fit for Jones who frequently collaborates with artists, including with Raymond Pettibon for his 2019 Winter collection. He placed artwork by Alex Foxton in embroideries at the heart of his spring 2020 collection and last year’s Tokyo show featured sculptures by Japanese artist Hajime Sorayama.

Back on American soil and in keeping with 90s coolness, Jones partnered with an iconic basketball label to introduce a limited-edition Air Jordan I sneaker. For the finale, models marched down the runway on bass-heavy techno version of Whitney Houston’s “I Wanna Dance With Somebody” and the after-party ended with an elaborate fireworks show.

“That’s what fashion is, to bring art into everyday life, so what better way to merge it than to have his collection right in the middle of it,” said Francis Zih, a surgeon who flew in from Vancouver, Canada, for the show.