Mumbai is playing with fire 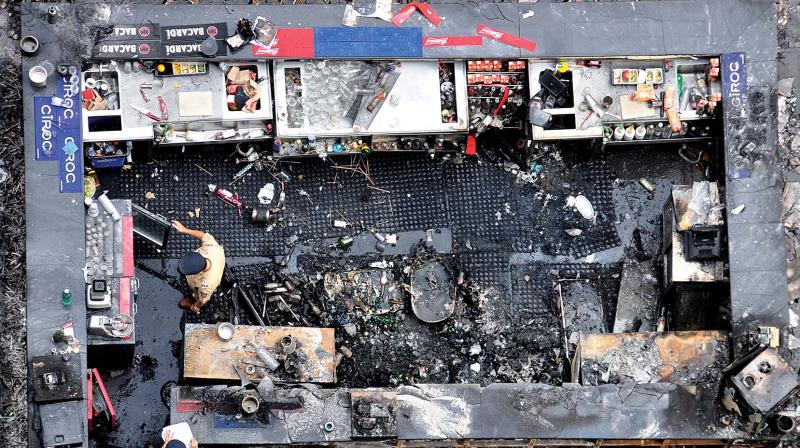 The remnants of the fire at Kamala Mills.

Over the last one year, the city of Mumbai has seen frequent bouts of deadly fires. The latest one to engulf two restaurants — 1 Above and Mojo’s Bistro — that took the lives of 14 people, was at Kamala Mills. The deadly blaze took place just two days before the New Year.

Short of any technical jargon, it is very clear what needs to be done: authorities need to enforce law strictly.

There was nothing wrong with the rooftop restaurants involved, except that they weren’t abiding by the fire safety regulations. But before we get to what went wrong that fateful night, we need to figure out why these rules weren’t adhered to.

There is a huge amount of corruption rampant, when it comes to cases like these. The fire brigade hasn’t exactly been the cleanest of departments, and are often known to even look past basic regulations.

This, in turn, allows — and even promotes — more illegal, unauthorised constructions. What I fail to understand is how they get away with this kind of stuff. You are creating these (illegal) structures out in the open for everyone to see, but rarely is action taken.

As far as the mishap itself is concerned, the source of the fire could be attributed to a lot of sources, even though the cause hasn’t been ascertained yet. However, from what I could see, they didn’t have a proper shed in place, instead making do with one made out of inflammable material (read: dry bamboo). That is an alarming sign, since these materials catch on fire in the blink of an eye.

Someone as much as carelessly throwing a lit cigarette could cause a fire. The source could well have been a hookah coal, or an electrical short circuit. There are a whole host of reasons why a fire can start, but the reason is a secondary problem in this case.

One needs to accept, and even imbibe the fact that a fire is to start somewhere or the other, and in a lot of cases cannot be prevented. It’s therefore important to think of how you can reduce the fire from spreading, which allows more people to try and escape quicker. Using fire-resistant material is one way to do so. The thing is, ultimately everything will burn down to the ground. But the question is, at what rate will that happen? The slower things burn down, the faster people can escape.

Accidents like these can be prevented with a solid fire escape route. In the case of the Kamala Mills tragedy, people ended up being squeezed into the bathroom, because while some thought it was a fire exit, most thought it would be the best place to escape. The thing is, what always kills you in a fire is not the fire itself, burning you to death, but the smoke, that will asphyxiate you first.

You see it in videos of fire — the smoke rises very quickly, in huge volumes and the gusts of smoke are inescapable! So, it is necessary to have at least two clear fire escapes that are broad enough for all the people to exit quickly. Moreover, they also need to be well marked. In fact, fire exits need to be marked in residential apartments too, but we don’t see that happening a lot either.

Unfortunately, the restaurants followed none of these pointers. Absolutely none. What beats me is how the fire department even passed all of these.

What one must keep in mind is that accidents with fire are bound to happen. But the question is how to contain them, and save trapped people.

Anil Dharker is a columnist and social thinker, with a second degree in mechanical engineering, specialising in building service engineering. He also pioneered fire safety regulations in multi-storeyed buildings in India.

— As told to Pooja Salvi