One of many tributes to the hard-won Maratha victory over the Portuguese, the small Hanuman Mandir next to the Sea Gate is peculiar. 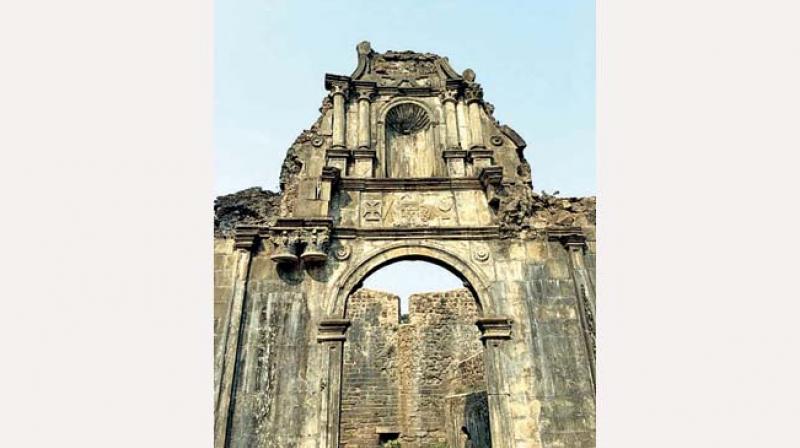 The fort is colossal, almost like a city within the city, with a rampart surrounding it.

Only 70km outside of the city, is a land of lush green fields, charming churches, cottages, and the imposing remains of a citadel that has witnessed half a millennium await.

All I knew about Vasai was of its historic fort, site of a major battle between the Portuguese and the Marathas. Initially christened the Fort of St Sebastian of Vasai, the imposing structure, spread over 110 acres, is in ruins but still offers a tantalising glimpse into history. So when INTACH offered a tour of the fort, I hit the road to Vasai.

Formerly Bassein (from the Portuguese Baçaim or perhaps related to the indigenous Vasa Konkani tribals), Vasai is accessible via the Western Railway. Get on a Virar train, ask someone to wake you up at Bhayandar station, get off at Vasai, and take an auto-rickshaw to the fort.

Caught in time, Vasai’s candy coloured churches and winding roads that suddenly open up into bursts of bright green fields are enough to remind you of pastoral paradises you’ve passed through, maybe in Goa. Vasai has weathered the Chalukya, Devagiri Yadava, and Sultan of Gujarat’s dynasties, but when Vasco Da Gama landed in Calicut in 1498, looking for a foothold in the west, the Portuguese coveted this harbour. A Treaty of Bassein signed by the Portuguese king and the Sultan Bahadur of Gujarat in 1534 allowed the colonial powers control of Bassein along with the islands and sea around it – this included the seven islands of Mumbai.

In the 16th century, Vasai was the epicentre of Portuguese activity, and they needed a bastion to protect their trade. The fort, constructed at that time, buzzed with over 2,400 soldiers and 3,000 residents according to the guide Mr. Pascal Lopes, a historian researching Portuguese and Maratha era coins for his PhD. The citadel also housed a church, chapel, hospital, granary, Jesuit college, library, Franciscan Monastery, town hall, coin mint, and even a bustling marketplace that infamously traded not just in spices, but in slaves as well.

It’s recommended you visit the fort with a group, as you can get lost within. These were the major sites we visited:

Bale Killa
The Citadel of Saint Sebastian, or the Bale Killa, is the first fort you encounter. Look out for an inscription in Portuguese near the main entrance. Dated 1536 AD, it mentions the governor at that time, Nano Da Cunha, and the captain of the fort, Garcia Desa.

The fort is colossal, almost like a city within the city, with a rampart surrounding it. We spotted a few locals drawing the water from the wells and a group dressed in their Sunday best presumably off to attend a wedding.

The imposing entrance features the Portuguese coat of arms (arrowed weapons), the Cross of Christos (the Portuguese were devout Catholics), and a sphere on the citadel. The British, who took over this Fort after vanquishing the Marathas in the early 1800s (who won it from the Portuguese earlier), seemed to have had scant regard for the religious iconography. They built sugar factories here, and the chimneys of these remain.

Mother Church
We wound our way to the Mother Church, built on the order of the king. It also housed a granary that supplied food to the town. Inside, the ceiling features an intricate pattern of tiles, the design of which crops up across other churches in the fort. A smaller rotunda (where baptisms once took place) features a 450-year-old fresco of angels on the roof that have been painted over but are still visible and a great reward once you spot them.

The top of the bell tower is begging for an Instagram post. If you can, do clamber up the dizzying steps for a beautiful view of the sea beyond the walls of the fort. You’re immediately reminded that the fort was built to be impenetrable – protected by the ocean on three sides – its gates therefore named, Sea and Land Gates.

One of many tributes to the hard-won Maratha victory over the Portuguese, the small Hanuman Mandir next to the Sea Gate is peculiar. Hanuman in this temple features a moustache and is trampling a female demon! Other glimpses of Maratha victory are rendered in a tableau of dancing elephants in a fort wall and a fleur de lis symbol (a curiously European one for the Marathas to choose) inscribed in the Sea Gate. Chimaji Appa, the brother of the then Peshwa, has been honoured for his victory with a statue in the vicinity, built after Indian independence.

Jesuit College
St. Francis Xavier (who now sleeps in the church of Bom Jesus in Old Goa) built this structure as well. The ravages of time and weather and an attitude of neglect have left most of the churches here destroyed beyond repair, but this is the best-preserved church in the entire precinct thanks to the timely intervention of conservationists during Indira Gandhi's time as Prime Minister.

Franciscan Monastery
Another landmark in the fort is the final resting place of fallen Portuguese soldiers, each grave featuring their coat of arms on the stone floor. Unfortunately, there isn’t much left to see. Rumour has it the beautifully engraved wooden gravestones from here would periodically end up as macabre keepsakes in Chor Bazaar!

The Tunnel
The highlight of the entire walk has to be the secret tunnel that runs under the Saint Sebastian Bastion, next to the Fort Commander or Captain's house. It has two entrances and two exits and runs nearly 530 feet long from one end to the other. The tunnel is narrow, tiny, infested with mosquitoes, and can render you extremely claustrophobic! So do not try this on your own.

Once you’re done exploring, head back to modern times and The Bassein Palate for a well-deserved lunch. This bright, cosy lounge serves coastal seafood delicacies and vegetarian options. As you eat, you can plot your return to Vasai to check out more churches, winding lanes, and unspoiled greenery.