Ghost nets are essentially commercial fishing nets that have been lost or discarded in the sea. 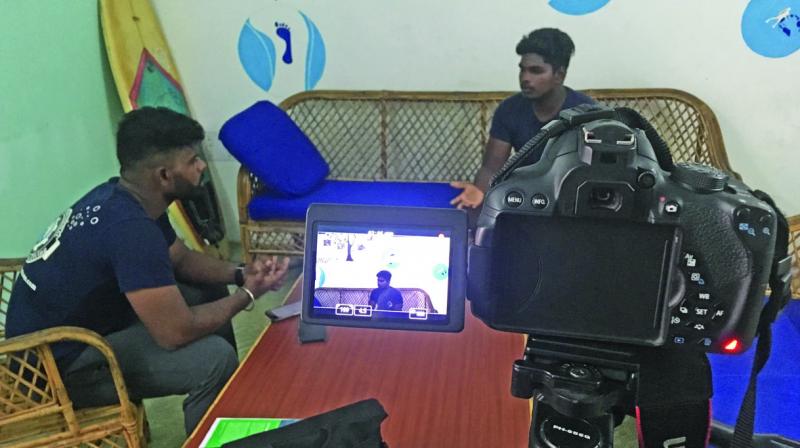 As pollution continues to engulf the environment and endanger life on land and water alike, a group of youngsters try to capture the plight of marine life and spread awareness.

Land, air, water — no part of our planet is safe anymore. When 16-year old Swedish activist Greta Thunberg said, “We have to understand what the older generation has dealt to us, what mess they have created that we have to clean up and live with,” she was trying to wake up an entire generation of youngsters to a bleak reality; a reality where they have to shoulder the burden of saving the planet from almost irreversible harm caused by the generations before them.

Echoing her sentiments, a young and driven team of nine youngsters (Akansha Tiwari, Aishwary Jamsandekar, Hussain Dhariwala, Anushka Ghadigaonkar, Amoli Birewar, Ishan Sharma, Aditi Sharma, Saahil Sud, and Mouli) is planning to bring a grave aspect of climate change and pollution to the big screen. Titled Tangled Seas, a documentary film that is in the production stage, is a call for the world to sit up and take notice of the issue of ghost nets in the oceans.

If you’re wondering what ghost nets are, then juggle your memory a bit and try remembering those images or videos that you must have come across on social media platforms of poor marine animals like turtles or seals entangled in plastic nets.

Ghost nets are essentially commercial fishing nets that have been lost or discarded in the sea. “I chose this topic because marine wildlife has been something very close to my heart and seeing animals like turtles or whale sharks or other animals that do not even have a market value get entangled in these nets in addition to the many other threats the ocean has to face is something that I thought was concerning,” explains independent filmmaker Akansha Tiwari who is the director of this project.

Buried in the depths of the vast oceans, ghost nets are the silent killers which trap and kill millions of marine animals including sharks, rays, bony fish, turtles, dolphins, whales, crustaceans and birds. Akansha feels that this is a huge issue that hasn’t been spoken about and needs to now be addressed. “I have always been someone aware and conscious about what happens with respect to environmental issues,” explains Tiwari about her research process before adding, “We have also spoken to a lot of experts and gone through a lot of research papers, footage, and stories about the problem of discarded nets and ghost fishing, overfishing, the stresses on the sea, etc.”

The crew consists of a group of students, filmmakers, science graduates, Ph.D. students, photographers, divers, marine biologists, marketing professionals and everyone in between, united by their love for the earth. Their budget — being primarily crowd-funded — might be less but the challenges are not. “Fishermen have certain traditional practices they follow, and even though there are people who are trying to create awareness about the problem of discarded nets and the consciousness it requires, not a lot of them are willing to give up on something their families and communities have been following for generations,” explains Tiwari.

The team of Tangled Seas has been collaborating with multiple entities like Temple Adventures/Temple Reef Foundation of Puducherry, and Ganesh B. Nakhawa (Blue Catch Sea Foods/President of Purse Seine Net Fishermen Welfare Society), Mumbai. As a part of their campaign, they have also been posting multiple snippets of statistics on the environmental issue on their social media pages.

The documentary, which is slated for release early 2020, is a reminder that the earth might be suffering heavily but there is still hope if we plan to act now.