The times may have changed, but the situation hasn’t. 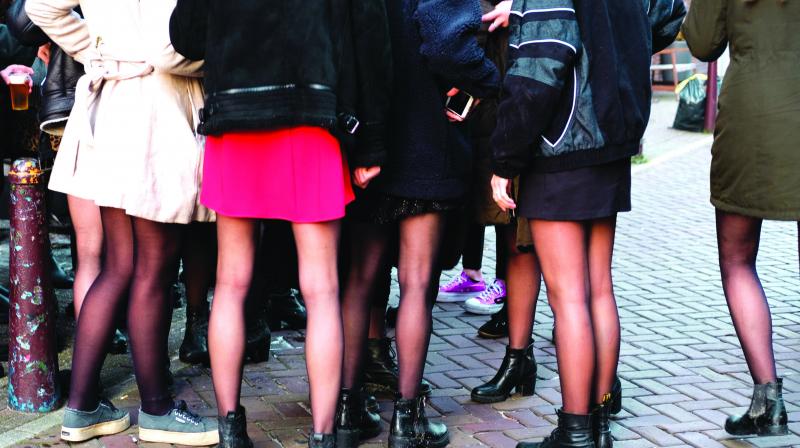 A bunch of college girls in the state of Hyderabad are protesting against a dress code that prohibits them from wearing kurtis shorter than knee-length.

The year was 1940. World War II was underway. A bunch of teenagers in Brooklyn were protesting outside their school against a dress code that prohibited them from wearing slacks.

The year is 2019. India is sending rovers to the Moon. A bunch of college girls in the state of Hyderabad are protesting against a dress code that prohibits them from wearing kurtis shorter than knee-length.

The times may have changed, but the situation hasn’t. The college in question justified its dress code by stating, “long kurtis will fetch them (the students) marriage proposals”. Last week, a medical college in Delhi similarly issued a strict dress code for girl students, while a Firozabad institute denied students from entering the campus as they were wearing burkhas.

This way, women across the world continue to be told what to do and what not to do. Ananya Banerjee, a college student says, “The-se prejudices are rampant. People still believe that a dupatta can help you gain respect. Wearing casuals and denim somehow gets translated into your disinterest or lack of respect.”

Manalisa Sarmah, an educator specialising in child pedagogy, believes that dress codes reflect hierarchised dichotomies, for example, masculine/feminine. “Women have always been seen as the custodians of culture. They are expected to observe cultural norms and their bodies become the sites onto which differences are mapped. These kind of dress codes are, hence, mostly enforced in patriarchal societies like India,” she explains.

These kinds of rules not only restrict women but also curb their personal space. “When girls are checked like this for their attires by the wardens or guards, it becomes a gross violation of one’s physical boundaries,” opines Komal Bhattacharjee, an advocate for mental health.

She continues, “We have always been conditioned to behave in certain ways as it benefits the social structures. This is interplay of patriarchy, capitalism and so on. You can’t really talk about these without talking about systemic oppression,” Komal shares. Especially since these happen in schools and colleges, Komal feels that this takes away one’s freedom of expression. “When you are telling someone that they can’t wear something or wear a kurta of a certain length so that you get better grooms, then what are you reducing these women to, ultimately? They become nothing but objects of the male gaze.”

These rules even take a toll on the mental health of young girls. “A lot of mental health issues among Indian women come from systemic oppression. It comes from the way we see our mothers and other female members in our family being treated. This whole idea of controlling who you are as a person takes a toll on them. It is almost symbolic in a way, as asking someone to wear a kurta is actually controlling them,” Bhattacharjee shares. She points out how indirectly girls and women are being told their worth in this way.

When it comes to gender non-conforming or non-binary students in the country, the situation becomes even more complicated. “It should ideally be my choice, what I want to wear. I can really don’t understand how making me conform to feminine or masculine clothes can bring discipline to an institute? Isn’t it time we bring in inclusivity?” wonders Juhi Esawar, a college student who identifies as a non-binary person.