The world peace body has decided to commemorate this International Day of Peace with the lesson of climate change. 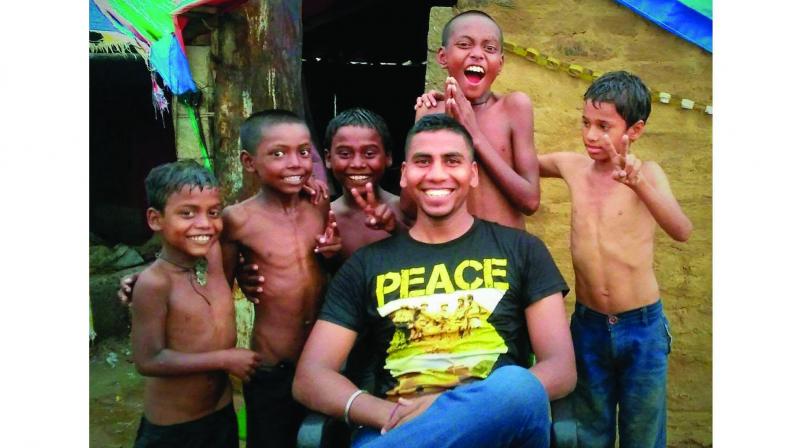 Deepak with some of his students.

Hailing from a small slum in Delhi, when 17-year-old Tanveer Fatima was about to appear for her 11th-grade finals, she was barely prepared. Not only for the examination but also for the world beyond her school. Was it because she had a below-average IQ or lacked interest in academics? No. It was because of the conditions she was living in. Fatima and her family live in a single room in Alipur. Her mother was a house-help and her father too sick to work. It was a struggle making ends meet every day for this family. Today Fatima is the primary bread-earner of her family, supporting her ailing father and mother. So, how did things turn around for young Fatima? It was when an environmentalist took Fatima under his wings and provided her free tuitions along with other slum kids that her life changed.

Deepak Kumar, a 25-year-old environmentalist from the small town of Purnea in Bihar is a man with a mission to put smiles on a million faces. Believing that education can transform lives, he has launched an initiative to teach slum children and already taught more than 500 underprivileged kids. Fatima is only one of those multiple success stories. He founded Smiles4millions, a foundation that aims at changing as many lives as possible. Recently, Deepak celebrated International Day of Peace in a unique way.

Deepak and his team of volunteers carried out numerous workshops and programmes throughout the week to commemorate this occasion. Plantation drives, health and hygiene camps for women, peace meets and a youth conference for sustainable peace were a few of the events that Deepak's team conducted for this cause.

Deepak’s father was an army veteran who had fought in the Kargil war. Imbibing his father's love for his countrymen, Deepak decided to serve his nation, but without picking up guns and ammunitions. It was when he joined University of Delhi that his real journey of self-realisation started. “After the classes during my graduation days got over, in the evenings, I used to observe two children selling eggs for their families and livelihood. They used to study on the street. So, I decided to support them. I would call them for free lessons and accept no fees for those classes,” recalls Verma. Deepak shares how other kids also started coming along with his students. “It became my first open-sky schooling class for underprivileged section children,” says Deepak. As the number of such students kept multiplying, Deepak realised how he could put his love for his country to use.

Speaking of what inspired him to go beyond free classes for underprivileged children, he says, “Travelling to the slums in Delhi, Punjab and Bihar, I saw the ground reality. There are around 5 million living in slums in India. My dream then became to not just help them expand their minds with education but to groom them to be better humans.” For him, global peace can only be achieved when the environment is at peace with the people living in it.

At a time when the planet is reeling from devastating climate change, youngsters like 16-yea-old Greta Thunberg and Deepak are flickers of hope in the society. Deepak dreams of making education more holistic and accessible for underprivileged kids, so that they learn to be better citizens of tomorrow.