Both snakes were found to be in good health and have been released back into the wild. 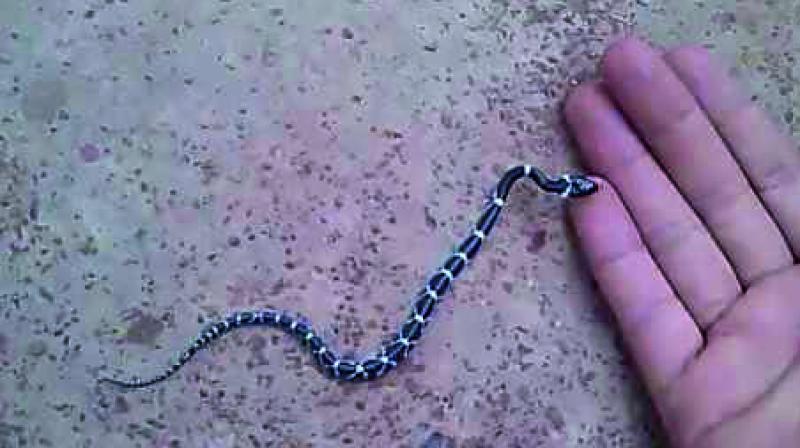 New Delhi: A juvenile wolf snake was found and rescued from inside one of the restroom of the Rashtrapati Bhavan, the second such rescue this week in the premises.

The snake was found by the house-keeping personnel, who contacted the  NGO Wildlife SOS to rescue the snake. A two-member rescue team carefully transferred the snake into a safe transport container, designed for the purpose.

The incident took place days after the maintenance staff found another wolf snake in the sprawling lawns of the President’s Estate.

The common wolf snake (Lycodon aulicus) is a non-venomous snake species found in South Asia and Southeast Asia. They are a highly adaptive species and are found in urban environments. Wolf snakes feed primarily on geckos, rodents and skinks. Their mating season begins in summer and extends to monsoon.

Wasim Akram, special projects manager, Wildlife SOS said, “Though relatively small and non-venomous, wolf snakes are alert and can turn aggressive when provoked. They defend themselves by trying to escape or retaliate by biting; therefore, safety precautions must be taken, while handling them.”

Both snakes were found to be in good health and have been released back into the wild.

Kartick Satyanarayan, Wildlife SOS co-founder and chief executive officer (CEO) said, “I thank the staff of the President’s Estate for alerting Wildlife SOS to this emergency. Wolf snakes are non-venomous, but they are frequetly mistaken for the highly venomous common kraits, which it closely resembles. Snakes are ecologically required for rodent control.”

“They never attack or bite unless they are cornered, provoked, stepped on or threatened.”

No curbs on immersion of Ganpati idols at Mumbai beaches: BMC