Mamata, however, did not specify the contradiction in the statements between Mr Modi and Mr Shah. 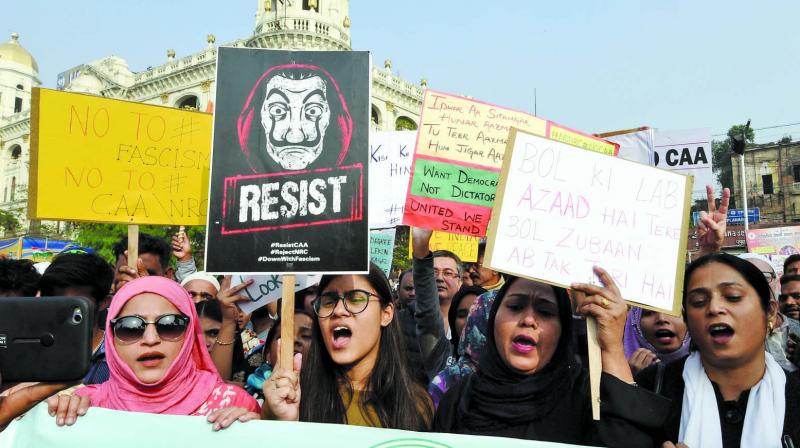 Protestors hold placards during a demonstration against the Citizenship Amendment Act and NRC in Kolkata on Sunday. (Photo: PTI)

Kolkata: Within a few hours of Prime Minister Narendra Modi's blistering attack on her for spearheading a fierce protest movement against the Citizenship Amendment Act (CAA) and National Register of Citizens (NRC), West Bengal chief minister Mamata Banerjee has shot back to him but in a muted response. On Twitter, she accused him of contradicting Union home minister and BJP president Amit Shah on the NRC in public.

The Trinamul Congress supremo, who has been leading a statewide agitation against the CAA and NRC, also wondered who has been driving a wedge in the “fundamental idea” of the country. She, however, pinned her hopes on the people to decide who was right.

Referring to Mr Modi, Ms Banerjee wrote on Twitter, “Whatever I said is there in public forum, whatever you said is there for people to judge. With #PM contradicting #HomeMinister publicly on Nationwide NRC, who is dividing fundamental idea of India? People will decide who is right & who is wrong #IRejectCAA #IRejectNRC.”

She, however, did not specify the contradiction in the statements between Mr Modi and Mr Shah.

In her rallies across the city in the past one week, the Trinamul chief had ridiculed the PM once for his “dress” comment and also appealed him to revoke the CAA while slamming the BJP and targeting Mr Shah on the two burning issues. But Mr Modi's direct salvo on her regarding her previous political stand on the illegal migrants and citizenship seems to have left her in a tight spot. Earlier Mr Chatterjee lashed out at the PM.

“Ms Banerjee is fighting for the people. She is raising her voice for their citizenship rights. She is the face of the protest. Now if anything happens, she is dragged unnecessarily. They (BJP) have lost direction,” the state education minister claimed.

Meanwhile, a section of professors of Visva Bharati, a central university of which the PM is the Chancellor, has written a letter to the PM extending support to the CAA.