The police failed to find the neck of the deceased, which could have helped identify the body. 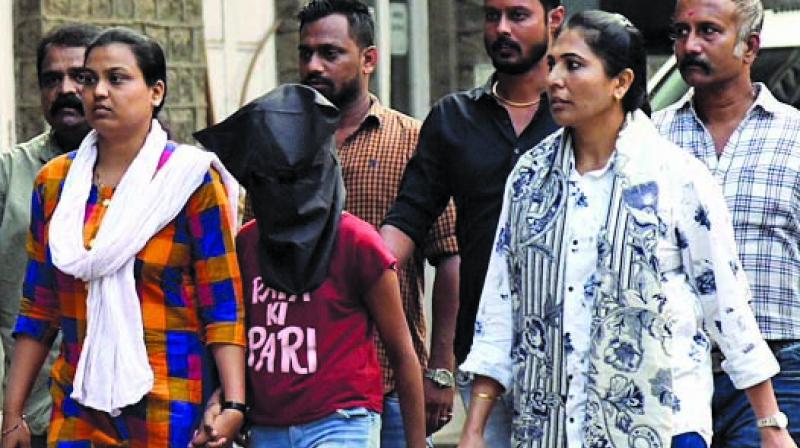 Mumbai: Mumbai Police has solved the mystery of the dismembered body which was found on the shores of Mahim on Monday. The police arrested the teenage adopted daughter of the deceased and her boyfriend on Saturday. The accused told the police that she killed her adopted father as he used to sexually abuse her.

Panic spread across the city on Monday evening after a suitcase with a stuffed body was found at the Mahim seashore. The police immediately registered an FIR and started investigation. The unit five of the Mumbai crime branch had also started a parallel inquiry into the matter.

The police failed to find the neck of the deceased, which could have helped identify the body. The police only found a severed left hand, a right leg and male private parts in the suitcase.

A police officer, who was part of investigating team, said, “We found two shirts, a sweater and a pant inside the suitcase along with the body, one which had the marking ‘Almo’s menswear’, a tailoring shop situated on Belgami Road in Kurla West.

“Taking up the trail, we traced the shop and managed to get hundred bills, bearing the name and signature of someone called Bennet,” the officer said.

Some officers started searching for people named Bennet on Facebook. After perusing many profiles, police had focused on one account that was of Bennet Reibello, who had also worn maroon sweater which was identical with deceased.

“We got Bennet’s card on Facebook, which gave details of his address, located in Santa Cruz East, and we were also able to match the signature found on the tailoring bill,” the officer said.

When police reached Bennet’s house, it was found locked from outside and neigbours said he used to live there with his 19-year-old adopted daughter. Bennet (59) used to organise musical shows in five-star hotels across the city.

“We zeroed in on his adopted daughter Aaradhya Jitendra Patil, also known as Ria Bennet Reibello, and her 16-year-old boyfriend. While she first claimed Bennet was in Canada, she later confessed to killing him with the help of her boyfriend as Bennet was sexually assaulting her,” the officer said.

Ria told the police that they, on November 26, first beat Bennet with a stick and then stabbed him multiple times. The duo also had sprayed pesticides on his face. Both had kept the corpse with them for three days at the Santa Cruz flat, where they also hacked it into pieces, placed it in a suitcase and dumped it in the Mithi river near Vakola.

“It reached Mahim beach after which the incident came to light. Ria and her boyfriend have been held and further probe is underway,” the officer said.

Meanwhile, the killing and stuffing of the dead body in a suitcase in this case draws some parallels with the infamous Neeraj Grover murder case.

Grover, a television executive, was found dead in May 2008, a crime for which actress Maria Susairaj and her boyfriend Lieutenant Emile Jerome Mathew, who was later found guilty of culpable homicide not amounting to murder, were arrested.

According to the police, an agitated Mathew had arrived in Mumbai on the morning of May 7 that year after hearing Grover's voice while speaking to Maria the earlier night. The latter had picked up a kitchen knife after having an altercation with Grover, which was used for stabbing.

According to Maria, who was later acquitted by the court for the killing but found guilty of destroying evidence, said it took three hours for Mathew to chop Grover's body into multiple pieces. The killing and the subsequent trial received significant press coverage in India.