The fire broke out on the 8th floor of the GST Bhavan and gutted the 9th floor as well. 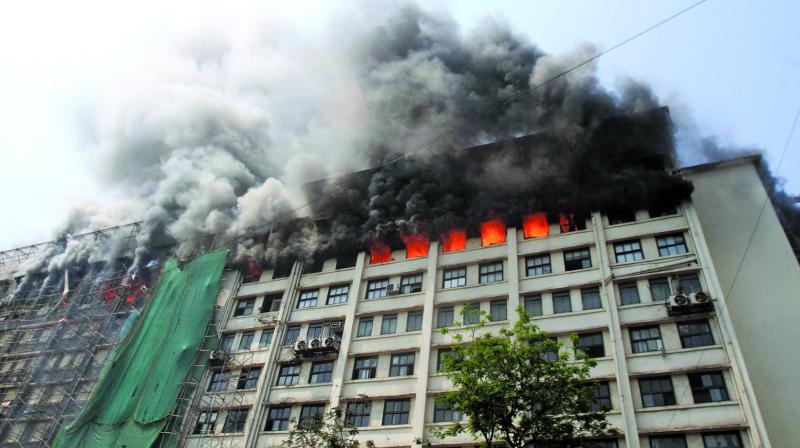 Smoke billows out of the GST Bhavan after a fire broke out on its eighth floor in Mazgaon, Mumbai on Monday. (Photo: Rajesh Jadhav)

Mumbai: Thousands of employees were evacuated from the GST Bhavan in south Mumbai after a major fire broke out in the multi-storey building on Monday, but no casualty was reported, civic officials said.

Nearly 3,500 staffers were working in the building in the Mazagaon area when the fire broke out around 12.30 pm, deputy chief minister Ajit Pawar said. The fire broke out on the 8th floor of the GST Bhavan and gutted the 9th floor as well.

The Mumbai Fire Brigade declared it a level-2 fire initially, but it was escalated to level-4 later. Over 20 fire engines were pressed into service to put out the inferno and cooling operation was underway.

Mr Pawar assured a probe into the fire but clarified that no records were lost in the blaze due to digitization of documents.

Firefighters battled for almost three hours to douse the flames, which started on the eighth floor of the 10-storey government-owned building, the officials said.

Speaking to media persons at the spot, Pawar said the fire spread rapidly due to presence of papers and wooden material in the building, from where thick smoke billowed out.

He said the building was smoke-logged and hence firemen used breathing apparatus sets to put out the flames.

According to the Fire Brigade, a portion of the building was under repair. The Brihanmumbai Municipal Corporation (BMC) officials said scores of employees were evacuated from the fire-hit building, but no casualty was reported. Though some staffers blamed short circuit for the fire, the officials said the exact cause was under investigation.

The building was earlier known as the Sales Tax Bhavan, but since the implementation of the Goods and Services Tax regime in 2017, it was rechristened as GST Bhavan.  Last week, a massive fire had partially gutted a three-storey commercial building in suburban Andheri.