The decision was taken in wake of situation in areas like Kopar Khairane, which witnessed violence during Maratha quota protest yesterday. 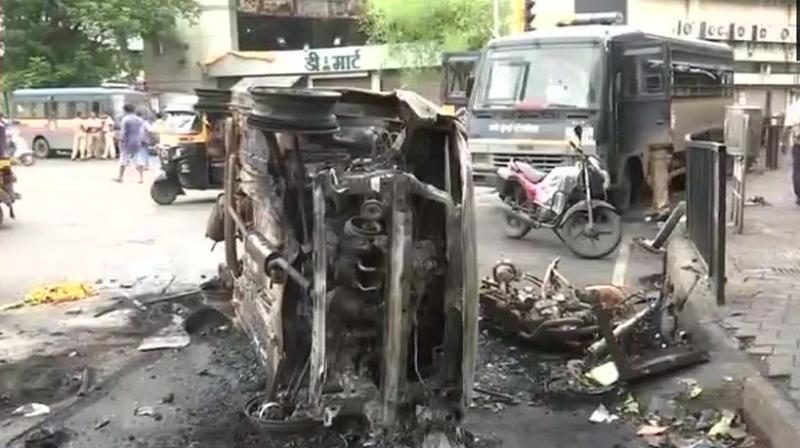 On Wednesday, police had lobbed teargas shells and used baton-charge in Kopar Khairane area after a group of protesters stoned vehicles, clashed with local people and indulged in arson. (Photo: Twitter | ANI)

Mumbai: Internet services in the neighbouring Navi Mumbai township have been suspended since early today, a police official said. The decision was taken in the wake of the situation in areas like Kopar Khairane, which witnessed violence during the Maratha quota agitation on Wednesday, he said.

The situation in Kopar Khairane was still tense, the official said.

On Wednesday evening, the police had lobbed teargas shells and used baton-charge in Kopar Khairane area after a group of protesters stoned vehicles, clashed with local people and indulged in arson. Miscreants had also set fire to a police outpost.

The incidents took place after the Maratha organisations, seeking reservations in government jobs and education, had called off the bandh.

A group of protesters who were returning home Wednesday night had hurled stones at vehicles of local people in Kopar Khairane, a police official earlier said. Later, some members of local communities had gathered at the spot and clashed with protesters, he said. The mob then hurled stones in which some offices and shops were damaged.

They also set fire to a police chowky (outpost) near D-Mart supermarket in sector 6. Five to six cars and over a dozen two-wheelers parked in front of the chowky were also vandalised and torched.

A hotel was set on fire in sector 3, the official said.