Sunanda K. Datta-Ray | India can take on China only if the economy is sound 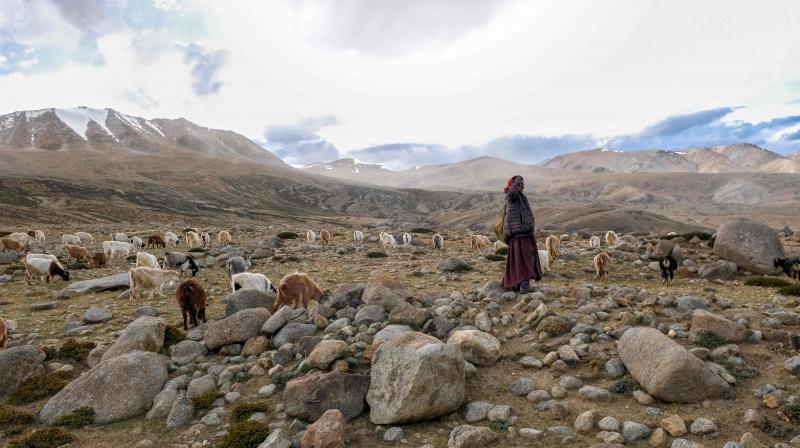 In this file photo taken on August 29, 2019, a Changpa nomad shepherd pastures pashmina goats near Korzok village, in the Leh district of Ladakh. AP Photo

Donald Trump’s chances of re-election might improve if he projects himself as the peacemaker in what he calls the “raging border dispute” between India and China. Similarly, some might feel that New Delhi’s position might be strengthened if Washington is unambiguously behind it. But neither assumption is directly relevant to the shadow boxing (with sporadic bouts of fisticuffs) that has continued along the 3,488-km India-China border in the 58 years since the brief sizzling war of 1962.

The border is only one factor in the tortuous relationship between Asia’s two giants. The economic interchange is probably more vital to long-term stability. But although the explosive border problem dominates attention, it cannot be solved easily because it embodies too much emotion, history, geography, strategy and politics, all of which have a bearing on contemporary life and future aspirations.

Because of these complications, India and China keep a wary eye not only on what the other country does on the border but also behind it, since this might affect future cross-border projections.

India was worried in 2017, for instance, that a proposed extension of the Chinese road at Doklam -- where Tibet, Bhutan and India meet -- would allow Chinese troops to approach close to what is called the Chicken’s Neck, the narrow corridor in West Bengal, just north of the Bangladesh border, linking mainland India with its Northeast.

Similarly, China is believed to feel that the Indian road to Daulat Beg Oldi in Ladakh, the world’s highest airstrip and the site of a Sino-Indian standoff in 2013, makes it easier for India to move troops to the Galwan valley. “The Galwan Valley region is Chinese territory,” China’s state-run Global Times asserted on May 25.

Relying on official sources, the Indian media accuses Chinese troops of crossing the border at several points and penetrating up to 4 km in Indian territory, and of destroying Indian posts and bridges, and digging in with tents and trenches.
Such incursions have been reported at the confluence of the Galwan and Shyok rivers, the Hot Springs area and Pangong lake in the west. Friction in the east was reported from near the Naku La crossing in the former Himalayan kingdom of Sikkim – bordering Bhutan, Nepal and China – whose 1975 absorption by India was never wholly accepted by Beijing.

These provocations are seen in the context of Beijing’s assertive position on the South China Sea, its ardently promoted Belt and Road Initiative (which India refused to join), lavish dollar diplomacy in Southeast Asia and vigilance in the Indian Ocean where a string of Chinese naval posts have been set up.

In many ways India, which cannot feel sanguine about China’s long-term intentions, seems trapped in a no-win situation. China’s deep pockets, military reach and astute diplomacy ensures the cordiality of most Asian countries. In contrast, New Delhi is often seen as preachy or arrogant. One current controversy involving a new pilgrim road India is building to facilitate travel to the sacred Hindu sites of Mount Kailash and Lake Mansarovar in Tibet is, strictly speaking, not a Sino-Indian issue at all. It’s landlocked Nepal, wedged between India and China, that complains of Indian trespass at the Lipu Lekh pass, one of several highly strategic areas (Limpiyadhura and Kalapani are two others) that Kathmandu claims, although they were policed by Indian troops since the 1962 war.

The 18th century founder-monarch of Nepal, King Prithvinarayan Shah, famously called the erstwhile kingdom a yam between two boulders. India suspects China of egging on the Nepalese. Whatever the truth, vulnerable Nepal’s dependence on India for aid, trade and access forces New Delhi to treat it with extreme circumspection to avoid charges of bullying.

The economic entanglement is even more embarrassing for Prime Minister Narendra Modi’s loud-mouthed assertions of “Atma Nirbhar Bharat” (self-reliant India) and the “Make in India” mantra. In 2018 India’s imports from China grew by 12.89 per cent to $76.87 billion, while the trade deficit widened to $58.04 billion. Although down to $51.68 billion last year, the deficit is still substantial.

As in the United States, cheap Chinese domestic goods are as highly popular as Chinese images of Hindu gods and goddesses. India is said to fear that any attempt to curb imports will result in retaliatory action with the Chinese refusing to sell vital pharmaceutical components.

The bigger truth is that Prime Minister Modi’s “Make in India” slogan has not produced the ability to match inexpensive Chinese plastics and electricals, which are highly in demand worldwide. New Delhi’s new policy on foreign direct investment, which requires any investment from a neighbouring country to be approved by the government, is an attempt to curb the role of Chinese finance but will be seen as yet another move by an ineffective government to use the law to thwart the popular trend. China has pumped more than $4 billion into Indian startups and Chinese investors participated in 54 rounds of funding in 2019, twice as many as in 2017, obviously because Indian entrepreneurs need and welcome Chinese capital.

President Trump’s mediation offer betrays his ignorance of these complexities of the Sino-Indian equation. Some reports suggest that he was not even aware until recently of the border dispute between the two countries. Now that he has developed his own serious differences with China over trade, he is seeking other issues and other disgruntled parties to strengthen his campaign, bringing in Covid-19, aggressive military moves in the South China Sea, Beijing's crackdown in Hong Kong and restrictions on Xinjiang’s Uighurs.

There only remains Tibet and the Dalai Lama, the traditional fallback human rights cause that all American Presidents espouse when they face problems with China.

India can afford not to join that list. Its most effective answer to China would be to avoid any kind of grand rhetoric and instead concentrate on developing a sound economy at home.