The year of the missing: Where’s our humanity?

All genocidal intent in India’s new policy is a clerical act of reclassification and the Rohingya go missing. 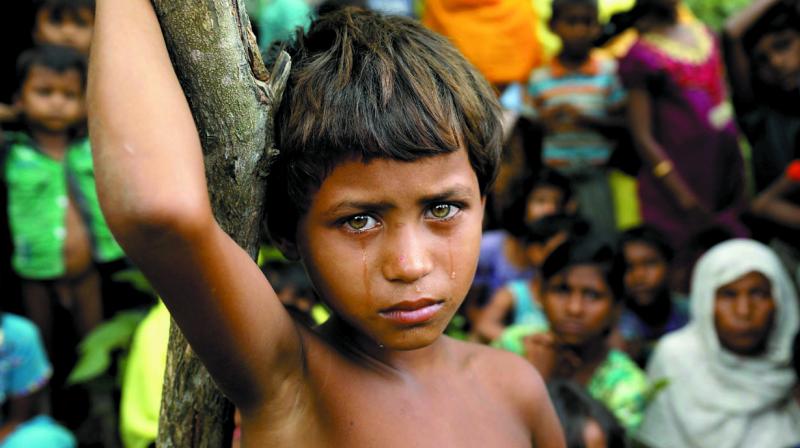 A Rohingya refugee girl looks next to newly arrived refugees who fled to Bangladesh from Myanmar in Ukhiya. (Photo: AFP)

The media has its own rituals, its ways of creating idolatry and sustaining iconography. The end of the year becomes a literal festival of salutations, picking the best and brightest. Attempts to pick the cricketer of the year, statesman of the year are attempts to highlight creativity and achievement. As the years turn mediocre, the selected people tend to be mediocre, midgets pretending to be genius. 2017 was the year of the mediocre and the predictable list of the so-called outstanding hardly stretches beyond Narendra Modi, Virat Kohli or Li Keqiang. Yet none of these choices appear convincing. One wants a magic, an epic quality to the name, and that sense of charisma is missing.

What marks 2017 is not achievement, but an absence of charisma, leadership or achievement. The negatives take over, as 2017 was in many ways a tragic year — polluted by violence and loss. 2017 becomes ironically the year of the missing. Missing people become a deep historical presence, a missing-ness is a non-being whose very existence creates a crisis of conscience.

The refugee, disaster survivor, displaced person become in their moment of erasure and forced marginality a presence which haunts the politics and policy of our time. Probably the most poignant was the war survivor — those abandoned to starve in Yemen as they become playthings in wars between nations. Iran and Saudi Arabia fought a surrogate battle for control, and Kuwait suffered. The UN says seven million people faced the prospect of starvation. What was most startling was India’s indifference to all this. It was literally a death of conscience for India, as it faced the missing-ness of Yemen. India was too busy signing defence deals with Israel and seeking to play the Israeli double in Asia — while creating these policy imaginaries, we let millions die.

Almost as poignant in this absent-presence was the Rohingya refugee. The Rohingya are Muslims, settled in Myanmar and subject to genocidal attacks by a military that sees them as unwanted and by the Buddhist majority that condemn them as unwanted aliens. The sadness was compounded by the political pragmatism of Aung San Suu Kyi, once one of Asia’s great moral figures. Her hostility and indifference to Rohingyas startled the West, shattering her halo as a human rights activist. The Joan of Arc suddenly turned into a realist politician winning brownie points with the military. Sadly, with every act of missing-ness, genocide seems to have become a way of life. Mirroring missing-ness is the normality of genocide as policy.

But before the pot calls the kettle black, one must add India’s role in the crisis was equally ugly. India forgot its traditional hospitality, which gave Tibetans a home a few decades back. India decided all Rohingya refugees would have to return to Bangladesh or Myanmar. This broke India’s facade as a moral nation. The decision was frighteningly bureaucratic. We reclassified the Rohingya not as political victims, but as undesirable aliens: prospective criminals and potential terrorists. All genocidal intent in India’s new policy is a clerical act of reclassification and the Rohingya go missing.

Local disasters too have provided a roll call of the missing. The most poignant of these was the missing boatman after Cyclone Ockhi devastated Kerala and Tamil Nadu. What is poignant is that an idiotic officialdom insists it announced a warning while people disappeared. In typically clerical style, it forgot that the fisherman had left a few days before the warning, and worse, the warning didn’t extend to anyone over 80 nautical miles away.

One has to be careful that the missing and the archives of the missing don’t become a demographic number. Numbers convey no sense of flesh and blood immediacy. A demography of the missing doesn’t convey a sense of missing-ness, mourning, loss. A fisherman might go missing, but his absence destroys a chain, devastating his family and creating a burden of debt that might take decades to repay. A narrative of the missing without stories of missing-ness is bleak and creates a sense or erasure. The announcement that a fisherman is missing creates weeks of anxiety, months of waiting, the sheer agony of prayer and silence as one waits for a loved one to return. Oddly, today’s governments don’t know how to join the ritual of mourning. They seek closure, an erasure of memory by announcing a bureaucratic dole. Cash payment for erasing the memory of the missing seems to be a standard policy line.

These three events — Rohingya, Yemen and Tamil Nadu — are recent ones, but some others go on from year to year, almost tiredly. One thinks of Kashmir and Manipur, and the military’s brutal role in this context. The roll call of the missing in Kashmir will never be taken. Only the women through their protest keep the memory alive. The missing in all these states become non-persons, and to recite a litany of such non-persons is treated as a subversive anti-national act. Oddly, it appears to be praising terror when one is actually questioning it.

This raises a set of poignant questions for democracy. First, there is the question of memory. A democracy needs a memory of the defeated, the dissenting, marginal and minoritarian as they go missing. Missing-ness does not erase them from the annals of citizenship. But more critically, one has to ask: “Does citizenship and its entitlements have any substantial meaning for the missing? Is a missing fisherman part of the social contract? Can they expect aid and concern from the State? Is missing-ness merely a prelude to erasure, obsolescence and amnesia? Is such a deliberate forgetting part of the violence we subject our people to today?”

In that sense, 2017 raises the issue of displacement, loss, missing-ness. It marks the political coming of age of the missing as the Narmada dam marked the era of displacement. Our democracy must invent new imaginations of care, concern and responsibility to challenge the emptiness of such political spaces. It is a response where such moments of crisis have to be worked into the everydayness of the democratic imagination.